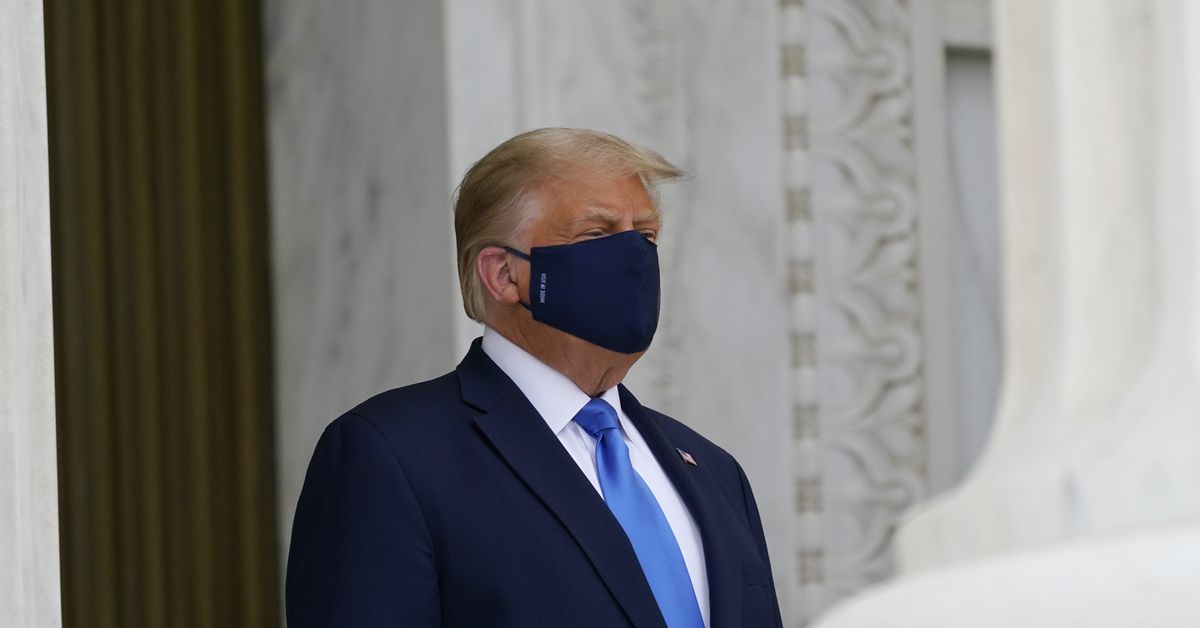 In a remarkable moment on Thursday, President Donald Trump refused to commit to a peaceful transfer of power following November’s election.

“Win, lose, or draw in this election, will you commit here today for a peaceful transferral of power after the election?” Trump was asked during a press conference by Brian Karem, the White House reporter for Playboy. It would have been a layup for any other president, but Trump took it as an opportunity to push conspiracy theories about mail voting.

“We’re gonna have to see what happens,” Trump said. “We want to get rid of the ballots, and we’ll have a very peaceful — there won’t be a transfer, frankly. There’ll be a continuation.”

This isn’t the first time Trump has refused to commit to a peaceful transfer of power — he said the same thing during an interview with Chris Wallace of Fox News in July.

TRUMP: “I think mail-in voting is going to rig the election.”

WALLACE: “Are you suggesting that you might not accept the results?”

WALLACE: “Can you give a direct answer that you will accept the election?

TRUMP: “I have to see.” pic.twitter.com/mPDPLY9vsr

By refusing to commit to a peaceful transfer of power if he loses, Trump isn’t necessarily alluding to the possibility of deploying federal troops to American streets to quash unrest. But as he’s consistently trailed Democratic presidential nominee Joe Biden in the polls by an average of 6 to 9 points in the national popular vote, and a slightly smaller margin in battleground states, Trump has made no secret of his plan to use every tool at his disposal to challenge mail ballots.

The Trump campaign has already filed lawsuits against mail voting in key swing states like Pennsylvania and Nevada. Last month, CNN quoted an unnamed senior Trump campaign official who said “the game plan is to fight [new mail-in voting laws] at every turn,” and reported that the Republican National Committee plans to devote as much as $20 million to contest “voting laws and policies that they view as unconstitutional and potentially damaging to the President’s prospects of winning.”

These lawsuits have been hard-pressed to find a solid legal basis, as mail voting has already been proven to be largely safe from fraud in a number of states. But if Trump can’t ensure a second term at the ballot box, the plan seems to be to ensure it in the Supreme Court.

Trump’s remark about wanting “to get rid of the ballots” alludes to his ongoing fight against mail voting, which he views as an existential threat to his presidency. He’s not even trying to hide that he’s in a rush to get Ruth Bader Ginsburg’s replacement on the Supreme Court so he can rely on the nation’s highest court to have his back if it ends up weighing in on the tallying of those ballots.

While a typical president would at least pretend to have reasons for rushing a nomination through that goes beyond naked self-interest, Trump, for better or worse, keeps saying the quiet part loud.

During a media availability on Wednesday, for instance, Trump told reporters that “I think it’s better” if Ginsburg’s replacement is approved before the election, “because I think this scam that the Democrats are pulling — it’s a scam — this scam will be before the United States Supreme Court, and I think having a 4-4 situation is not a good situation.”

“This scam that the Democrats are pulling … will be before SCOTUS, and I think having a 4-4 situation is not a good situation.” pic.twitter.com/8d08UjzrZK

By “scam,” Trump was referring to the conspiracy theories he’s been spreading for months about Democrats using mail voting to “rig” the election against him. In reality, a number of states (including purple ones like Oregon and deep-red Utah) already have robust mail voting systems that have proven to be relatively impervious to fraud. But Trump realizes that legal challenges to mail voting — which is more in demand this year than ever before because of the coronavirus pandemic — could allow him to challenge a possible Biden victory.

Trump said largely the same thing on Tuesday, when he told reporters that “we need nine justices” because “with the unsolicited millions of ballots that they’re sending … you’re gonna need nine justices up there. I think it’s gonna be very important.”

“We need 9 justices. You need that. With the unsolicited millions of ballots that they’re sending … you’re gonna need 9 justices.” — Trump suggests he’s counting on SCOTUS to have his back when he makes claims of election fraud following November’s election pic.twitter.com/Ju8ShMe8MN

Of course, there’s no rule requiring that the Supreme Court have nine justices to oversee a presidential election — there were only eight in 2016 because Republicans stonewalled then-President Barack Obama’s attempt to nominate Antonin Scalia’s replacement.

What Trump is really saying is that nine justices are needed to ensure an outcome favorable to him — and Republicans like Sen. Lindsey Graham (R-SC) don’t seem particularly troubled by this.

Lindsey Graham: “People wonder about the peaceful transfer of power. I can assure you it will be peaceful. Now we may have litigation about who won the election, but the court will decide, and if Republicans lose, we’ll accept that result. But we need a full court.” pic.twitter.com/mVBGtMXiBF

You don’t have to go far back in time to find precedent for the Supreme Court weighing in on a presidential election. The Supreme Court played a key role in 2000 by ruling that a recount in the decisive state of Florida be halted, a move that resulted in Al Gore conceding to Bush.

Trump is quite transparently counting on a similar last-ditch plan if key battlegrounds are trending against him — and wants to make sure the Court is stacked in his favor if and when it comes to that.

Following Ginsburg’s death, the Court is now divided between five justices nominated by Republicans — two by Trump (Brett Kavanaugh and Neil Gorsuch), two by President George W. Bush (Samuel Alito and Chief Justice John Roberts), and one by President George H.W. Bush (Clarence Thomas) — and three nominated by Democrats (Obama nominations Elena Kagan and Sonia Sotomayor, and Stephen Breyer, who was nominated by President Bill Clinton). But Roberts has occasionally voted with the Court’s more liberal justices and can’t necessarily be counted on to side with Trump, raising the specter of a 4-4 vote.

That changes if Trump is able to make the third successful SCOTUS nomination of his term. In that event, even if Roberts does up voting with the liberals, the bloc of Kavanaugh, Gorsuch, Alito, Thomas, and whichever conservative replaces Ginsburg would likely be enough to assure that whatever challenge to mail voting the Court ends up hearing on behalf of Trump has a good chance of success.

Since mail ballots tabulated after Election Day could potentially sway the result for Biden, the Atlantic’s Barton Gellman reported that one possibility is Trump proclaiming victory if the margin is close on election night, then citing real or imaged irregularities with mail ballots to try to get them thrown out.

As Ari Berman, a senior reporter at Mother Jones and author of Give Us the Ballot: The Modern Struggle for Voting Rights in America, told me last month, “mail ballots take longer to count than in-person ballots. So you could very much have a situation where the initial returns make it seems like Republicans are way up, because the mail ballots that are largely cast by Democrats haven’t been counted yet.”

A tweet Trump posted in 2018 as mail ballots tallied after Election Day threatened to swing races in Florida from apparent Republican victories to Democratic victories encapsulates the line of thinking he might use to try to discredit mail ballots this time around.

The Florida Election should be called in favor of Rick Scott and Ron DeSantis in that large numbers of new ballots showed up out of nowhere, and many ballots are missing or forged. An honest vote count is no longer possible-ballots massively infected. Must go with Election Night!

Again, Trump isn’t really even trying to hide that if he can’t win at the ballot box, he’s hoping for a 2000 redux. During a rally in Fayetteville, North Carolina, last Saturday, Trump said, “We’re gonna have a victory on November 3 the likes of which you’ve never seen. Now we’re counting on the federal court system to make it so we can actually have an evening where we know who wins.”

“We’re gonna have a victory on November 3rd the likes of which you’ve never seen. Now we’re counting on the federal court system to make it so we can actually have an evening where we know who wins” — Trump pic.twitter.com/q5bfsJQb76

But because so many voters plan to vote by mail this year, it’s unlikely that we’ll know who won the presidential election on election night. That’s not evidence of fraud — it just reflects logistical challenges with tallying mail ballots. Trump, however, is telegraphing that allegations of election fraud could be his last-ditch strategy for holding on to power, and he’s hoping that getting Ginsburg’s replacement on the Supreme Court will help in that effort.