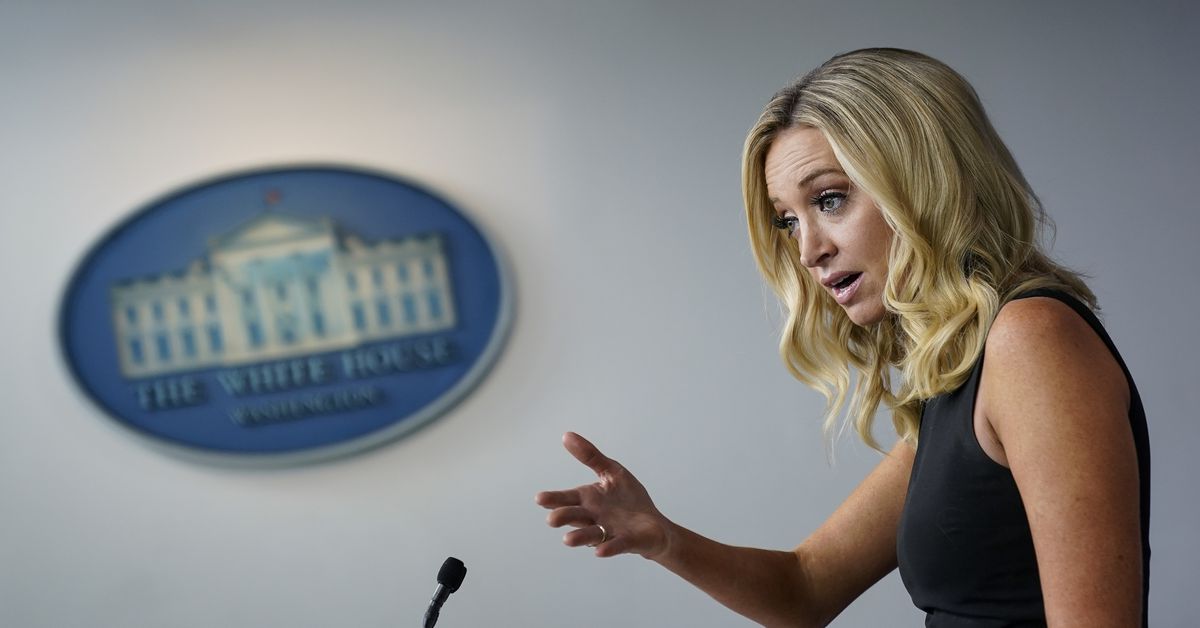 President Donald Trump often tells reporters that big plans of his, such as health care or immigration proposals, will be unveiled in “two weeks.” It’s a tell — when Trump says something is coming in two weeks, you know it’s almost certainly not coming at all.

Trump’s favorite way of buying time has apparently rubbed off on Kayleigh McEnany, his fourth White House press secretary. Asked during Tuesday’s briefing if a health care plan that Trump has been saying is merely weeks away will finally be unveiled this week — “there are doubts that such a thing actually exists,” a reporter pointed out — McEnany said, without a shred of irony, that her boss “will be laying out some additional health care steps in the coming, I would say two weeks.”

Q: Will the president finally unveil the health care plan he promised this week? Some people think it doesn’t exist

McENANY: It certainly does exist. The president in the next week or so will be laying out his vision for health care pic.twitter.com/8l1b7Qdbdx

That particular exchange illustrated how at this late date of Trump’s first term, the White House press briefings have become something akin to a parody of Trump’s administration. Instead of providing the public with useful information, McEnany puts on a masterclass of spin, obfuscation, and propaganda that would be amusing if it wasn’t such an affront to the idea that the federal government should work on behalf of the people.

It’s hard to remember now, but the Obama administration’s press briefings were criticized, too. For instance, in April 2010, a Politico report described the Obama White House as “thin-skinned, controlling, eager to go over their heads and stingy with even basic information,” noting that while Obama promised to be more open with the press than other presidents, “reporters feel [his administration] doesn’t live up to that pledge.” But Obama-era briefings seem like beacons of transparency and cordiality compared to the dystopian scenes we’ve become accustomed to in the Trump era.

Tuesday’s briefing was a good example of the state of the White House press briefing. What follows is a rundown of some of the lowlights.

McEnany’s latest briefing came hours after the US hit the grim milestone of 200,000 confirmed coronavirus deaths. Trump himself spent the early days of the pandemic saying the virus would go away on its own, but McEnany insisted on Tuesday that the president deserves credit for keeping the death toll below 2 million.

“We were looking at the prospect of 2 million people potentially perishing from the coronavirus in this country,” McEnany said in response to a question from Jim Acosta of CNN about what the White House’s message is to Americans who hold administration officials responsible for the mounting death toll. “The fact that we have come nowhere near that number is a testament to this president taking immediate action.”

.@acosta: What do you say to Americans who blame this administration for 200,000 Covid deaths?

McENANY: The fact that we have come nowhere near 2 million deaths is a testament to this president taking immediate action pic.twitter.com/Y5rHBLanG6

These comments represent a dramatic relocation of the goalposts from where Trump put them during the early days of the pandemic in February and March, when he cited 200,000 as the upper limit of possible coronavirus deaths in the country.

But now that deaths have surpassed 200,000, McEnany is suggesting that any death toll under the 2.2 million deaths an Imperial College study projected if the federal government did absolutely nothing to slow the spread is evidence of the great job Trump has done. Before Acosta could drill down, however, McEnany moved on.

Tuesday’s briefing came hours after Trump said at a rally in Swanton, Ohio, that the coronavirus “affects virtually nobody.” In fact, Covid-19 is now the third-leading cause of death in the US, behind only heart disease and cancer.

Trump’s comments were widely condemned and are indefensible on both human and public health levels. But that didn’t stop McEnany from trying.

Asked by Acosta why Trump isn’t telling the public the truth about the pandemic, McEnany accused him of “taking the president out of context” because “you’re making an assertion that he’s not giving critical information when in fact he is.” But that wasn’t at all what Acosta said.

McEnany went on to point out that a number of states have had no reported cases of children dying from Covid. But that’s not at all the same as saying Covid-19 “affects virtually nobody.”

Later, McEnany claimed that Trump “never downplayed critical health information” to the public about the pandemic. But just weeks ago, the Washington Post published a recording of a March conversation between Trump and journalist Bob Woodward in which Trump says of the coronavirus, “I wanted to always play it down. I still like playing it down, because I don’t want to create a panic.”

Asked at another point if Trump would like to publicly recognize or express remorse over the fact that 200,000 Americans have now died from Covid-19, McEnany claimed that “the president throughout this pandemic has done just that.” In fact, Trump has been more apt to say things like “it is what it is” about the mounting death toll than he has been to show empathy.

As if to prove the absurdity of McEnany’s comments, hours after the briefing, Trump brusquely ignored a reporter who asked him why he hasn’t said anything publicly about the grim 200,000 death milestone.

But when the real Trump won’t suffice, McEnany has no compunction about singing the praises of a fictional one.

McEnany began her tenure as press secretary by promising reporters she would never lie to them. “I will never lie to you. You have my word on that,” McEnany said early during her first briefing on May 1.

But McEnany isn’t personally responsible for ruining the White House press briefing — doing so was quite literally one of the first acts of the Trump administration. Recall that on Trump’s very first day, then-Press Secretary Sean Spicer took the podium to angrily castigate reporters for accurately reporting that the crowd size for Trump’s inauguration was small compared to President Obama’s 2009 inauguration, insisting it was “the largest audience to ever witness an inauguration, period, both in person and around the globe.”

That set the tone for everything that’s followed, including McEnany’s tragicomic showing on Tuesday.

That is shameful but unsurprising from the Speaker! pic.twitter.com/qrrpBAX2uK

Using impeachment to undo the Constitution isn’t a thing. It’s nonsense, and McEnany should know better. But spreading nonsense in the service of Trumpism is what being the White House press secretary is all about.