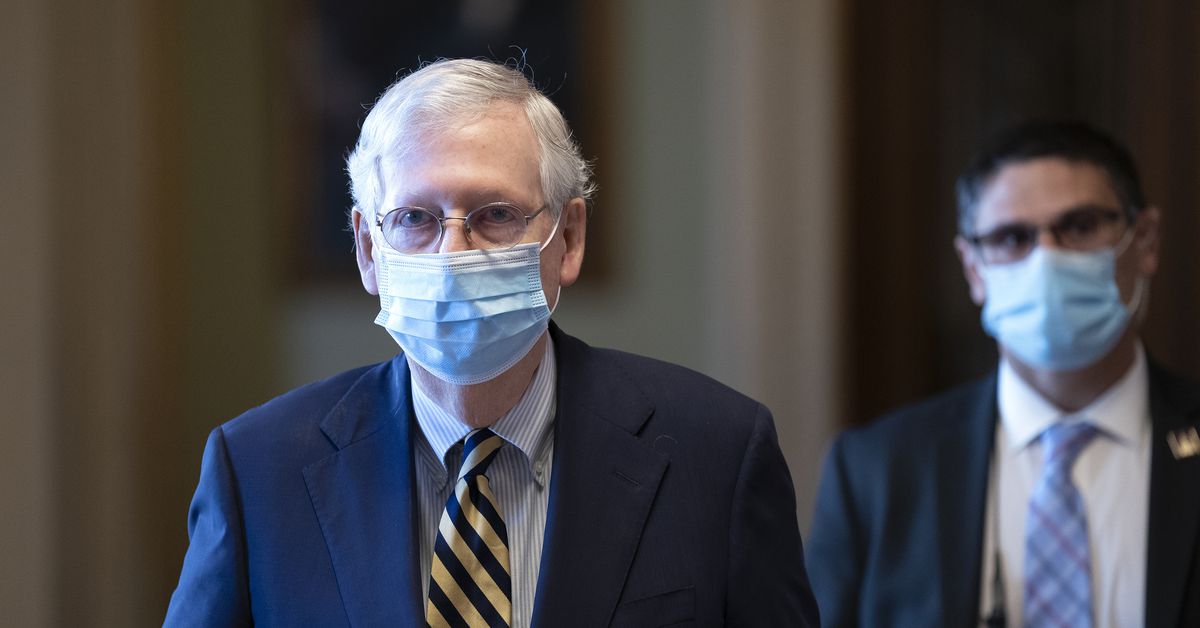 Election Day is just over six weeks away. Can Senate Republicans hold a vote to replace Supreme Court Justice Ruth Bader Ginsburg before then?

The short answer is yes, they can, if they — meaning, at least 50 Republican senators — want to.

In recent decades, the Supreme Court confirmation process — from nomination to the final vote — has lasted two to three months. Typically, this time is taken up by vetting of the nominee’s history, writings, and career, and then hearings in the Senate Judiciary Committee (which can last several days), before Senate leaders attempt to line up sufficient support for a floor vote.

But there’s no reason other than decorum that all this has to take so much time. If Republican senators are unconcerned about the appearances of an unseemly rush to a vote, they can certainly hold a quicker vote should they so desire.

Ginsburg herself was confirmed just six weeks after being nominated, though her nomination was uncontroversial and it wasn’t just before an election. President Trump says he plans to announce his nominee for Ginsburg’s seat on Friday or Saturday, which would leave five and a half weeks before election day — a shorter timeline, but not that much shorter.

Overall, Senate Majority Leader Mitch McConnell and Republicans certainly can push a vote before the election if they want to do so. But McConnell will only choose to do this if he sees it as preferable to the other option (waiting until the lame-duck session), and if he can line up the votes for confirmation before then.

Of course, the Senate is famous for the ability of the minority to thwart the majority’s wishes, through the filibuster, which takes 60 votes to overcome. But Democrats changed the rules to dispense with that 60-vote requirement to advance most nominations back in 2013, and Republicans finished the job with their own rules change to let Supreme Court nominations be advanced by a simple majority in 2017.

So the minority no longer has its famous procedural tool to block action here. There are some remaining procedural moves that Democrats can make to delay things slightly, but they should be understood more as protest tactics than anything that could actually “stop” a confirmation that the majority wants.

For example, Democrats could boycott Senate Judiciary Committee chair Lindsey Graham’s (R-SC) hearings for the eventual nominee. That would deny the committee a quorum, which, under a strict interpretation of the rules, would mean they can’t act. However, Democrats have tried similar tactics with Graham’s committee in the past, and he has simply ignored the rules when they are inconvenient.

Others have pointed to the Senate rule requiring 51 senators for a quorum to conduct business. There are currently 53 Republican senators, meaning that three Republicans could vote no on a Supreme Court nominee and that nominee would still be confirmed by the other 50 Republicans and the tiebreaking vote of Vice President Mike Pence. However, former Senate aide Jeff Blattner points out that Pence does not count for purposes of establishing a quorum.

So the idea here is that if those three Republican senators join all Democrats in denying a quorum (by not answering or not being present when one is called), they could block a nomination vote from proceeding. However, the idea that any, let alone three, Republican senators will join Democrats in this highly unusual tactic to thwart their colleagues from even taking a vote seems fanciful. (Procedural extremism from the minority is generally not an effective tactic at winning over members of the majority, who tend to resent it.)

Finally, others have suggested that, more broadly, Democratic senators use their power to “grind everything to a halt” in the Senate by withholding the “unanimous consent” that the chamber runs on day to day. The problem here is that, to McConnell, this Supreme Court nomination effectively is “everything.” Filling this seat will be his top priority. Making other Senate business more inconvenient for him and Republicans might be an effective attention-getting stunt, but it certainly wouldn’t make him cave.

The big picture is that McConnell can essentially hold a vote on an eventual nomination whenever he wants to hold one. The only real constraints are whether he can line up 50 Republican senators for confirmation, and if so, how long that will take. (That’s not to say McConnell will hold a vote before the election — he may see it as in his party’s political interest to do it afterward.)

As usual, the question is whether enough Republican senators will decide to stand by McConnell and Trump, or defect. So far Sens. Susan Collins (R-ME) and Lisa Murkowski (R-AK) have said the seat should be filled by the next president (even if there is a bit of wiggle room in their statements). But that’s not enough — two more defections would be necessary to block a nominee, and it’s unclear who they’d be.

Perhaps Democrats’ best hope is the window for confirmation is narrow enough that something — we don’t know yet what — may go wrong.

For instance, the time-honored way to derail a Supreme Court nomination is to unearth some scandal in the nominee’s background. It’s at least possible that something like this will throw a wrench into McConnell’s plans. Still, Republicans ended up confirming Brett Kavanaugh despite Christine Blasey Ford’s accusation that he sexually assaulted her as a teenager (an accusation Kavanaugh denied), so the bar for a nomination-scuttling scandal here will surely be set quite high. And even if a nomination is botched, depending on when it happens, Trump and Republicans could still have time to confirm someone else.

Other close Senate votes, such as the Obamacare effort, have been placed in jeopardy by health problems for certain senators, or by surprising special election results. The point is that the future’s uncertain, so the longer the process takes, the better for Democrats.

McConnell has a more complicated calculus. He wants to get a nominee confirmed, but he also wants to hold on to his Senate majority, and those two objectives could theoretically come into conflict.

The question here is what’s best for the vulnerable GOP senators facing tough reelection fights? Sens. Martha McSally (R-AZ) and Thom Tillis (R-NC) have both said they want the current Senate to fill Ginsburg’s seat, but they haven’t said whether that should happen before or after the election. Sen. Cory Gardner (R-CO), trailing in every poll this year, hasn’t announced his position. A pre-election vote could theoretically help mobilize Republican voters — but it could also energize Democrats in opposition.

The problem with waiting for the lame duck, for McConnell, would be that he doesn’t know what the post-election world will look like. If Democrats win big, a hasty November vote to replace Ginsburg will look very ugly and likely encourage Democratic reprisals next year (some in the party are musing about threatening to abolish the legislative filibuster or pack the courts).

McConnell doesn’t even yet know how many Republican senators he’ll have throughout the whole lame duck. Arizona’s race is a special election, and if McSally loses, her Democratic opponent will replace her shortly after the election results are certified, which could be at the end of November.

There’s also the Georgia special election for Kelly Loeffler’s seat, where polls show the vote split between two Republican and two Democratic candidates — theoretically, it would be possible for one Democrat to win the race with over 50 percent of the vote, which would avert a runoff, and mean the winner would be seated during the lame duck. This would be a tall order considering the current state of the polling, but it’s not outright impossible.

Now, if McConnell is hell-bent on getting a nominee confirmed anyway, he can just make sure to hold the vote in November, before any special election winner is sworn in. But still, it’s an added layer of complication that lessens his room for error and opens up the possibility that something can go wrong. The problem is that acting before the election could lessen the chances that he’s still the majority leader next year.