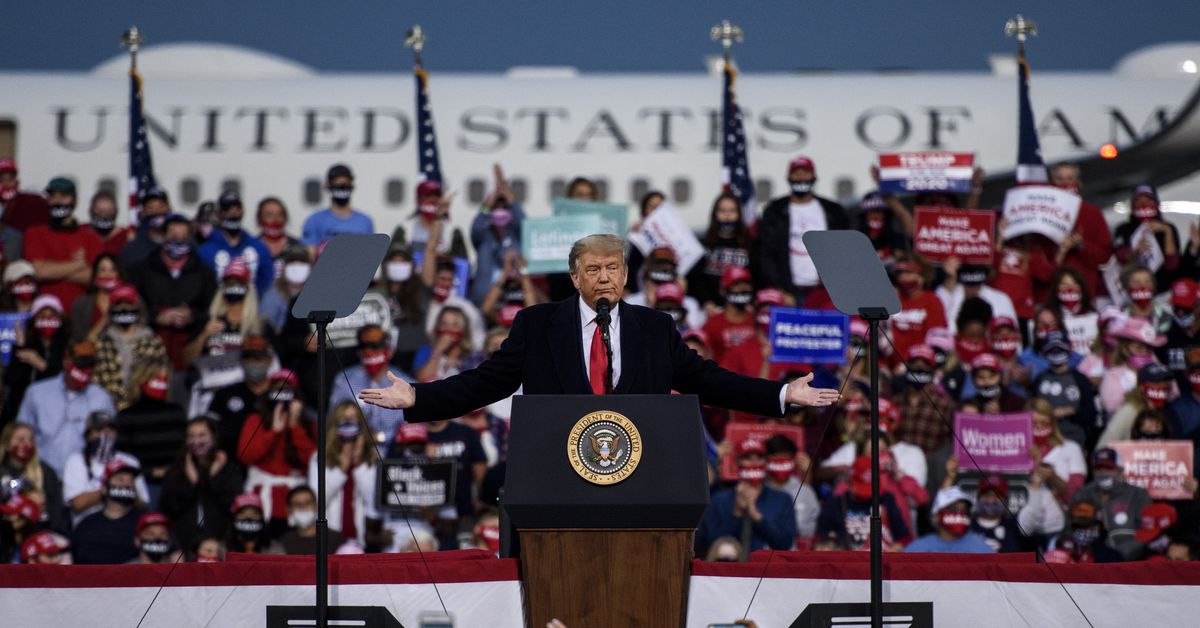 President Donald Trump is traveling around the country and holding packed campaign rallies in the middle of a pandemic with few masks and no social distancing. These campaign rallies serve as snapshots of the president’s messaging as he heads into the home stretch of his flagging reelection campaign. The picture isn’t pretty.

From the podium, Trump routinely mocks local regulations against large gatherings, which he refers to without a sense of irony as “protests against stupidity.” Instead of touting his accomplishments or outlining a second-term agenda, Trump is praising white people for their genes and suggesting women of color who serve in Congress should be prosecuted. He’s offering apologia for the Confederacy while barely trying to conceal his authoritarian designs.

Those tuning in to Trump’s rallies will see a power-hungry president who is increasingly turning up the race-baiting and attacks on the free press. His base loves it, but it should worry everyone else.

Trump’s Friday evening speech in Bemidji, Minnesota, began just before news of Ginsburg’s passing broke. Trump made it through his more than two hour speech without learning about it, which resulted in surreal scenes of him talking about his two Supreme Court nominations in the past tense as people yelled out things like, “Ginsburg is dead!”

Speaking in a white part of a white state, the big takeaway from Trump’s speech was how many different forms of racism it featured. He began by alluding to Minnesota’s Somali population and said, sarcastically, “Are you having a good time with your refugees?”

The Minneapolis part of that community is represented in Congress by Rep. Ilhan Omar, a Somali refugee who Trump has demonized for years. During his Bemidji speech, Trump pushed unproven conspiracy theories about Omar’s personal life and suggested she and two other women of color who serve in Congress should be prosecuted.

“We’ll prosecute ‘em. Yeah. Why not?” Trump said to cheers.

Then there was the sight of a US president campaigning on a pro-Confederate platform. Minnesota fought valiantly as part of the Union during the Civil War, but Trump heaped praise on Confederate general Robert E. Lee, who he said would’ve “won except for Gettysbury” and described as “incredible.”

“[Lincoln] was getting beaten a lot by Robert E Lee. They want to rip down his statue all over the place … he would have won except for Gettysburg … these were incredible things” — Trump praises the top general who fought on behalf on slavery pic.twitter.com/7dnzZ9nQJV

Things somehow got even worse. Toward the end of his speech, Trump praised his mostly white audience for their “good genes” — comments that left open the question of what genes the president thinks are bad.

Of course, it’s not exactly breaking news at this late date that Trump uses racist rhetoric. But it’s remarkable just how racist his reelection campaign is. And by pitting his supporters against Minnesota’s Somali community, his strategy of using race to divide and conquer was on full display.

If Trump’s Friday speech was about racism, his showing the next night in Fayetteville, North Carolina, was about authoritarianism.

Trump began with a brief tribute to Ruth Bader Ginsburg, but quickly pivoted to talking about his plans to fill her seat as soon as possible as his fans chanted, “Fill that seat!”

Trump begins by saying nice things about Ruth Bader Ginsburg. Trump’s audience isn’t thrilled about it but politely refrains from booing. But he immediately pivots to how he plans to quickly fill the seat, prompting huge applause & chants of “fill that seat” that he encourages. pic.twitter.com/AHyhtxN2Rx

If anyone was hoping that Trump’s motives are untainted, he quickly disabused them of the notion, saying, “We’re gonna have a victory on November 3rd the likes of which you’ve never seen.” He quickly added that “we’re counting on the federal court system to make it so we can actually have an evening where we know who wins.”

“We’re gonna have a victory on November 3rd the likes of which you’ve never seen. Now we’re counting on the federal court system to make it so we can actually have an evening where we know who wins” — Trump pic.twitter.com/q5bfsJQb76

These comments alluded to Trump’s insistence that mail voting, which has proven to be safe and effective in a number of states and is in higher demand than ever because of the coronavirus pandemic, is being used by Democrats to “rig” the 2020 election against him. He wants people to believe that any delay in tallying results is tantamount to fraud, and is hoping the Supreme Court will have his back.

That wasn’t the only corrupt quid pro quo Trump boasted about during that speech. He also said that as a condition of Oracle’s involvement in a TikTok sale, he’s demanding that Oracle’s leadership “do me a favor” and “put up $5 billion into a fund for education so we can educate people as to real history of our country, not the fake history.”

Holy shit. Trump says that as a condition of TikTok’s sale, he tried to shake down Oracle to put $5 billion into a fund “so we can educate people as to the real history of our country — the real history, not the fake.” pic.twitter.com/82CMVDeodF

Trump doesn’t have the power to extort private companies like that. But he wants you to think he does, and his supporters may think so too.

Another element of Trump’s authoritarianism was evidence in remarks he made in both Minnesota and North Carolina about MSNBC host Ali Velshi, who was tear-gassed and shot by a rubber bullet live on air while covering the George Floyd protests in Minneapolis.

“It was the most beautiful thing,” Trump said in Bemidji, alluding to video of Velshi getting shot. “It’s called law and order.”

On Saturday — hours before Trump again lauded the law enforcement officials who shot Velshi — MSNBC sent a statement to Vox characterizing the president’s comments as a threat against free speech.

“Freedom of the press is a pillar of our democracy,” it said. “When the president mocks a journalist for the injury he sustained while putting himself in harm’s way to inform the public, he endangers thousands of other journalists and undermines our freedoms.”

But what one person views as a threat to constitutional liberties another views as an applause line at a campaign rally. The events themselves are a public health risk taken as the president has mockingly flouting public health regulations during a pandemic. In that sense, perhaps what Trump’s latest rallies showed most clearly is America’s polarization between people with a sense of empathy on one hand, and the president’s base on the other.