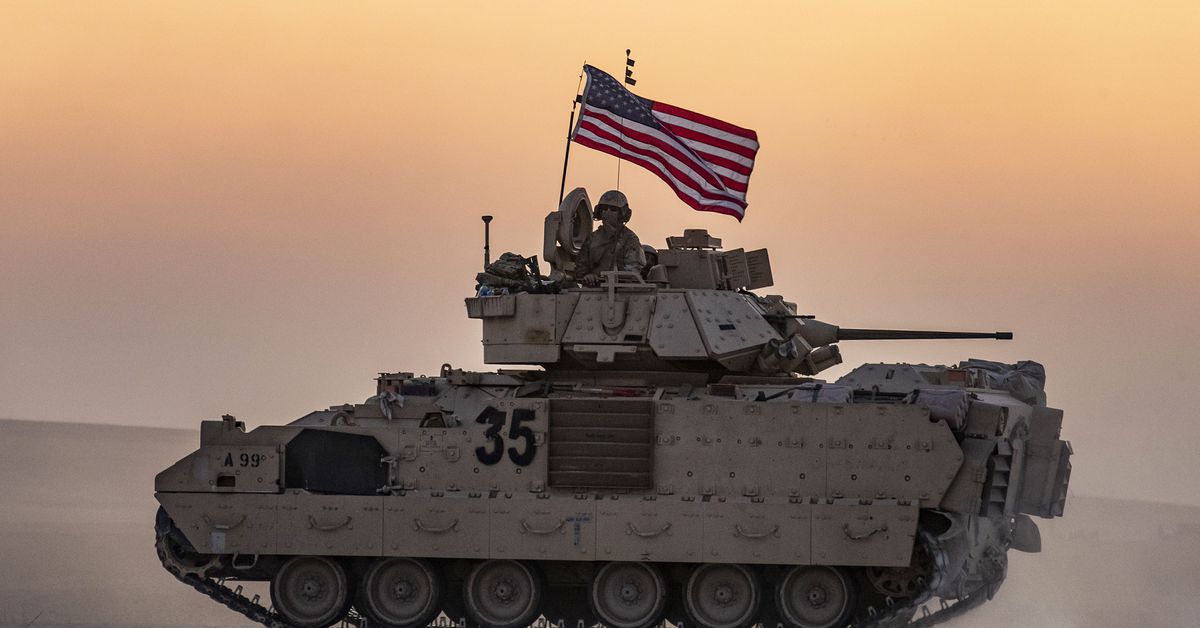 Despite President Donald Trump’s clear desire to withdraw US troops from Syria and improve ties with Russia, the Pentagon will imminently send around 100 more service members to the war-torn nation to better confront Moscow’s forces.

On Friday, the US military announced Bradley fighting vehicles, radar, and more fighter jets to conduct patrols would be on their way to northeast Syria.

The decision comes just a month after seven US service members suffered concussions during a skirmish with a Russian convoy that wasn’t expected in the area. The altercation clearly moved the Defense Department to provide reinforcements for the roughly 500 US troops still in Syria as part of a global coalition to defeat ISIS.

US Central Command, which oversees US military operations in the Middle East, “has directed a number of actions in northeast Syria to help ensure the safety and security of Coalition forces,” spokesperson Capt. Bill Urban said in a Friday statement. “The United States does not seek conflict with any other nation in Syria, but will defend Coalition forces if necessary.”

Some experts understand why the US military made this decision. “A small escalation like this is a very classic move in this type of situation, and is a smart way to signal our commitment and attempt to deter Russian forces from taking further steps,” Shanna Kirschner, a Syria expert at Allegheny College, told me.

And avoiding more aggression is needed. “Russia has escalated its harassment of US forces in recent weeks and is likely to continue to provoke such incidents, requiring the US to take extra precautions to ensure our forces remain able to prosecute their mission against ISIS,” said Jennifer Cafarella, a national security fellow at the Institute for the Study of War in Washington.

For example, Moscow is also using a disinformation campaign targeted at US allies in Syria, namely the Kurdish-led Syrian Democratic Forces, to persuade them America isn’t a committed partner. Reports indicate the SDF has quietly courted Russia to assure their survival in case US forces leave the region. And in June, Russian troops tried to set up an outpost in Derik, not far from where the US has already set up its own camp.

The situation may be improving, though. Marine Gen. Kenneth McKenzie Jr., the US Central Command chief, told NBC News last week Russia’s “behavior has been better” since US and Russian military leaders discussed how to deescalate tensions. “I don’t want to judge or project what it might be in the future,” he continued, “but I would simply tell you that we are ready for all eventualities in Syria and the force has what it needs to protect itself.”

Despite the injection of troops and weapons to Syria, Trump assured reporters on Friday — the same day as Central Command’s announcement — that the US military wasn’t involved in the country. “We’re out of Syria, other than we kept the oil,” he said during a White House press conference. “I kept the oil. And we have troops guarding the oil. Other than that, we’re out of Syria.”

There are four problems with that statement.

First, the US is clearly not “out of Syria” — more troops are going in. But Trump’s confusion is expected, especially since he ordered US service members to leave the country last year, only to have a smaller force remain behind.

Second, the US military is protecting oil fields in the country, but much of the oil and money from it is actually going to the Kurds, not America. Trump somewhat admitted this in the same press conference: “We’ll probably be dealing with the Kurds and the oil and see what it all ends up.”

Third, Trump made no mention of the actual US military mission in Syria: to defeat ISIS, not protect and revamp oil fields.

Finally, Trump didn’t note the recent problems with Russia in Syria or the injuries to the four US military members during last month’s clash.

In fact, Trump still hasn’t said anything about the August incident, leading former Vice President Joe Biden to rebuke Trump during an August 31 campaign rally: “Did you hear the president say a single word? Did he lift one finger?”

Such comments could signal that Syria, and US military issues more broadly, could play some role in the 2020 presidential election debate. The controversy over Trump’s reported attitude toward service members — that he believes they are “losers” and “suckers” for putting themselves in harm’s way — continues to fuel Biden-led attacks. Further, both candidates want to be seen as the leader who would extricate the US from foreign wars, not prolong them.

The Syria decision, then, could provide both men fodder for their campaigns. Trump could say he will do whatever it takes to safeguard American forces, while Biden could claim the president doesn’t care about service members he’s long left vulnerable against Russian aggression or even the extent of the military’s actual size and mission in the country.

Should that argument take off, the already nasty election could get a whole lot nastier.