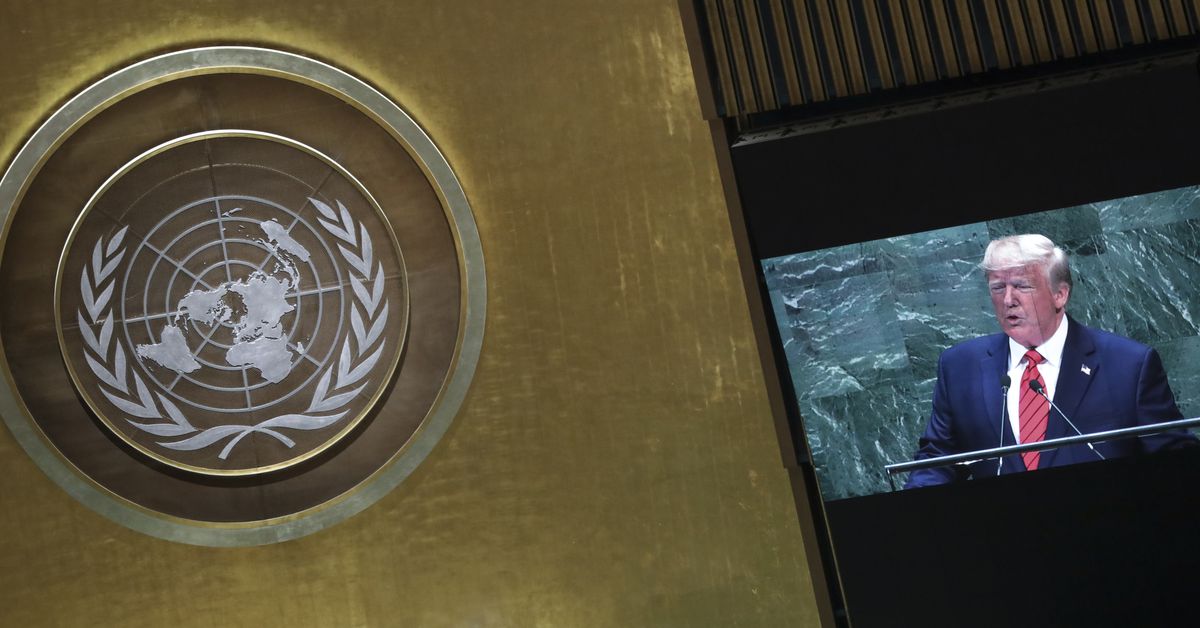 The United Nations will have a quiet 75th session this year. The heads of state are staying home, the high-level sessions are happening online, the bilateral meetings and cocktails parties are canceled, and the midtown Manhattan drivers, at least, are getting a reprieve.

The emptied-out United Nations headquarters in New York City is another casualty of the Covid-19 pandemic. The General Assembly, the annual mass gathering that attracts world leaders each year to Manhattan, will be virtual this year for the first time in its history, with presidents and prime ministers delivering pre-taped video remarks instead.

It’s possibly also the most potent metaphor for the situation the United Nations system finds itself in on its 75th anniversary — in the middle of a global health crisis that is pulling the world apart.

“It really is fairly symbolic of the emptiness in multilateralism,” Thomas Weiss, a United Nations expert at the Graduate Center at the City University of New York, said of the moment.

At the center of it all is the Trump administration, which has gone beyond the general skepticism some previous US presidents have had for the United Nations system to outright scorn. Trump has gone to New York to address the UN General Assembly every year of his presidency so far, and each year has basically repurposed an “America First” speech. He will likely revisit some of those themes this year, too. Except Trump is expected to deliver his speech via video conference, rather than in person, on Tuesday.

But the backdrop will be starkly different this year, and not just because of the logistics. The pandemic has widened the cracks in the global order and increased geopolitical tensions, particularly among the superpowers. The United States, which helped establish the United Nations system 75 years ago, this year moved to withdraw from its premiere health agency, the World Health Organization (WHO).

The Trump administration’s retreat from alliances and multilateral institutions has gone from rhetoric to reality. The consequences of that — not just for the US, but the rest of the world— are in painful view. The UN system is only as strong and resilient as its member states make it, and when the US pulls away, the institution starts fraying along with it.

The United Nations has always been far from a perfect system, but it is at a particularly precarious moment. It may not withstand another four years of Trump, but, with an election coming, there is also a possibility it might not have to.

This might be Trump’s last UN speech — or the last of the United Nations as we’ve known it.

Trump toyed with the idea of delivering his General Assembly address in person, to a nearly empty chamber, but the White House confirmed Thursday that Trump would not be making the trip to New York City after all.

All world leaders did have the option to attend in person, but they would have had to follow New York’s quarantine rules for travelers, meaning they’d have had to self-isolate for 14 days upon arrival. That “made it impossible for any leader to come and physically be present in the General Assembly,” UN General Assembly President Volkan Bozkir told reporters. Instead, leaders will deliver pre-recorded remarks, introduced by a delegate from their respective countries who will be in the chamber.

The spectacle of the United Nations — all of these world leaders descending on New York — is mostly what focuses the attention on the General Assembly. The pre-recorded remarks will make it hard for any world leaders to respond directly (or indirectly) to what others say in real-time.

Plus, a lot of the real work of the United Nations is the diplomacy that happens on the sidelines of the main show. That will be nonexistent this year, and at a time when it’s probably more necessary than ever.

So to put it pretty bluntly: Expectations are pretty low for this year’s General Assembly, which is basically going to be one very, very long Zoom meeting of world leaders. “There is not going to be this symbolism of the parade of world leaders to address the ‘Town Hall of the World,’” Stewart Patrick, a fellow in global governance at the Council on Foreign Relations, told me.

But even in this diminished form, what leaders say will matter. That’s especially true for Trump.

Last year, Trump again went all in on national sovereignty, reprising his case that all nations should protect their borders and reject mutual and international cooperation that doesn’t put their country’s own interests first. He also touted some of his foreign policy successes, as he saw them, including his trade deals. He discussed the threats of China and Iran at length and condemned Venezuela’s socialist regime. Expect a repeat, and then some this year. (Vox reached out to the White House to confirm that Trump has submitted a video to the UN, and we’ll update if we hear back.)

Trump is scheduled to speak Tuesday morning, and it will be as much for world leaders as it is for a domestic audience. This US is six weeks out from an election, after all. This is a chance for him to showcase his accomplishments, whether or not they match with reality.

The president will almost certainly bring up the recent normalization agreements between Israel and Arab states as proof of his dealmaking and diplomacy skills. He’ll also likely bring up Venezuela, because the anti-socialism message is a case he’s also making at home.

Most of all, though, the speech will be an opportunity for Trump to scapegoat countries and institutions that he blames for the spread of the coronavirus — a tactic he’s used to deflect from the US government’s own failures to handle the pandemic.

China, of course, will be at the top of the list. Tensions between Washington and Beijing have escalated in the wake of Covid-19, as the administration seeks to blame China for mishandling the outbreak in the early days of the pandemic. This will be a chance for Trump to show how tough he is on China, even if President Xi Jinping won’t be there to hear the message in person.

The president has always rejected the multilateral vision of countries working in concert to address global issues that undergirds the UN in broad terms. But this year will be a test to see if Trump goes after the UN and its agencies more directly, whether on Iran sanctions or the WHO’s handling of the coronavirus.

The administration has taken steps to withdraw from the WHO, which it claims failed in its coronavirus response by being too conciliatory to China. This is a massive move because of how much the United States contributes to the international organization, and how much of its work already reflects US interests. It is also a profound misreading of how global institutions work: Power comes from powerful member states, and the US walking away only cedes more leverage to countries like China who might make up the gap.

This is why Trump’s speech could very well signal what another four years of his presidency means for the UN. The Trump administration already withdrew from a bunch of UN agencies, including the Human Rights Council, but leaving the WHO is a much more dramatic step.

The administration has, so far, snubbed cooperation on Covid-19, specifically the WHO-affiliated effort to distribute a vaccine globally. Other nationalist and populist leaders have also pushed back against multilateral efforts, but none have the influence or financial clout of the US. And if the US refuses to work within the system, why would any other country agree to do so?

“I think it’s a pivotal moment,” Patrick told me. “The next couple of months are going to be absolutely critical in deciding the future directions of the US-UN relationship and conceivably, even the fate of the United Nations as the world’s premier body for international cooperation.”

This United Nations is facing some of the greatest global challenges in decades. A pandemic has killed more than 950,000 people worldwide and will demand an unparalleled mass vaccination initiative. A global economic catastrophe, a hunger crisis, an education crisis, a domestic violence pandemic and more have all sprung from Covid-19, and the outbreak has either compounded or sidelined other global emergencies like war, and migration, inequality, poverty, and climate change.

But the UN is struggling to meet this moment, even as its member states commit, in principle, to the institution.

On Monday, the UN hosted a high-level meeting to commemorate the body’s 75th anniversary, and adopt a resolution reaffirming the necessity of multilateral cooperation, with the UN at the center. Though this is meant to be pretty uncontroversial, in drafting the resolution, the US objected to language about the commitments in the Paris Climate Accords. (Ultimately, references to the Paris deal and to climate change more generally remained in the resolution, but the language was watered down a bit.) On Monday, Trump was scheduled to give a video address at the commemoration; instead, another UN ambassador addressed the audience.

The resolution also mentions Covid-19, calling it “the largest global challenge in the history of the United Nations.” And yet, even as the specter of the pandemic hangs over this virtual United Nations, there is a sense that no one wants to address Covid-19 directly. All of it is too fraught, too political.

The geopolitical tensions between the United States and China are a roadblock to any real discussion, as both are powerful veto-wielding members of the UN Security Council. A cooperative approach to equitable funding and distribution of a coronavirus vaccine is being threatened by vaccine nationalism. There is a high-level side meeting next week on accelerating the end of the Covid-19 pandemic, that will discuss equitable access to treatments and vaccines. But again, the US has already said it won’t participate, and China also doesn’t appear to be on the list, which the WHO is releasing Monday.

That doesn’t mean real progress can’t be made at the UN this year, but much of the hard work of diplomacy usually gets done on the sidelines, at informal meetings. And that can’t happen this year.

This is the world that nationalistic politics has wrought, playing out in real-time. The UN has many flaws, but it is now trying to withstand an unprecedented crisis at the same time many of its members are turning inward. Its ability to overcome them is ultimately going to depend on how seriously member states take this recommitment to multilateralism — if it moves beyond principle, into practice.

There are glimmers of hope, like cooperation on a Covid-19 vaccine, and the European Union trying to assert a greater leadership role. But there are also real danger signs. It sounds dramatic to say, but this week may offer a hint at whether the United Nations can, even in its imperfect form, withstand these challenges, or whether three-quarters of a century after it was formed the world will see it slide toward true irrelevance.

“Institutions rarely, completely disappear. They just become shells of their former selves,” Weiss, the UN expert at CUNY, said. “But the organization can be considerably less visible, vigorous and important than even it is now.”