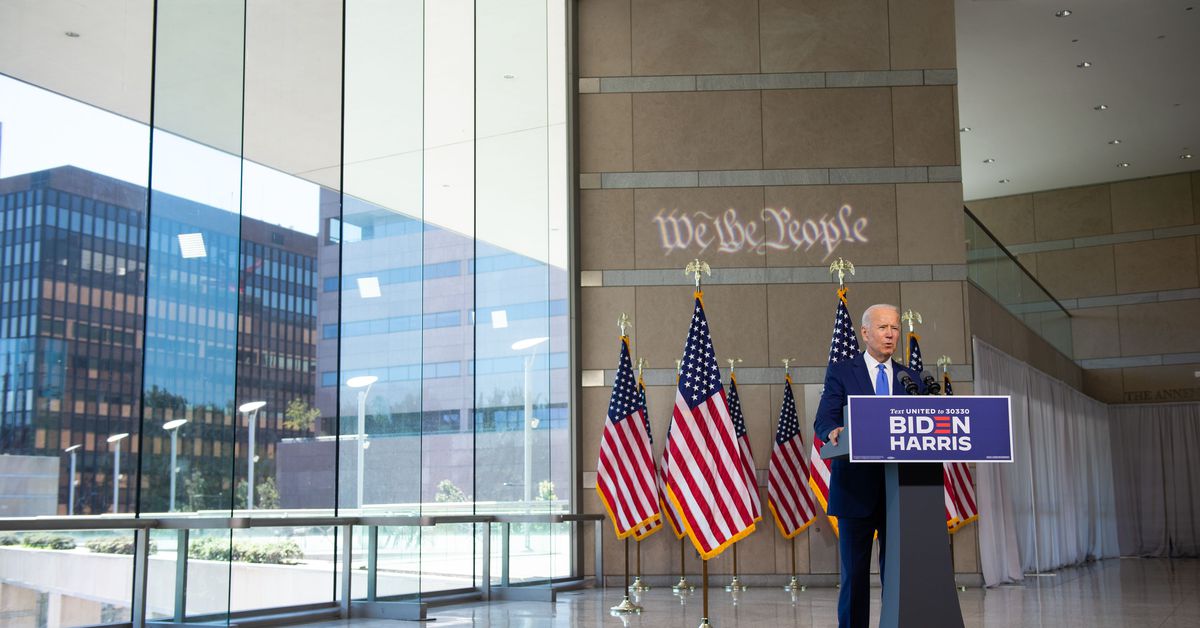 In an impassioned plea for a restoration of procedural norms and good-faith governance, Democratic presidential nominee Joe Biden has called for President Donald Trump’s forthcoming Supreme Court nominee to be withdrawn should he win the election in November.

“If I win this election, President Trump’s nominee should be withdrawn and, as the new president, I should be the one to nominate Justice Ginsburg’s successor,” Biden said during a speech in Philadelphia on Sunday.

There is little indication that this request will be honored; Trump has said he will nominate a justice to replace the late Justice Ruth Bader Ginsburg in the next week, and Senate Majority Leader Mitch McConnell has said the president’s nominee will receive a vote in the Senate.

But Biden’s speech was strikingly blunt about acknowledging that reality.

Biden went on to explicitly say he was trying to appeal to the “handful” of Republicans whom he sees as either moderate or norm-oriented enough to consider his proposal.

“Please, follow your conscience,” he said. “Don’t vote to confirm anyone nominated under the circumstances President Trump and Senator McConnell have created. … We can’t keep rewriting history, scrambling norms, and ignoring our cherished system of checks and balances.”

Biden’s remarks foreshadowed the governing style that he’s repeatedly said he would favor as president — an appeal to the better angels of his political adversaries, and a belief that bipartisanship is possible when human decency is foregrounded in America’s political culture.

Biden did not, for example, use threats of retribution to make his case. By contrast, Democratic leaders in Congress are contemplating a wide range of options should they win control of the Senate and White House in November.

It’s not clear exactly what’s being considered seriously, but activists and Democratic lawmakers like Massachusetts Sen. Ed Markey have discussed abolishing the filibuster and packing the Supreme Court with liberal justices in a bid to restore the balance of power in Washington if they win back the Senate.

Mitch McConnell set the precedent. No Supreme Court vacancies filled in an election year. If he violates it, when Democrats control the Senate in the next Congress, we must abolish the filibuster and expand the Supreme Court.

In the immediate term, there would appear to be little Democrats could do to stop Trump from seating a new justice. Republicans need only a simple majority — 50 votes, plus a tiebreaker vote from Vice President Mike Pence — to confirm whoever Trump nominates.

Democrats do not yet have the votes to block a Trump nominee in the Senate. They will need four Republican senators to either abstain or vote no on that nominee; as of Sunday, only two — Sens. Susan Collins (ME) and Lisa Murkowski (AK) — have said they believe the Senate shouldn’t vote on the president’s nominee before November’s election.

Polls have indicated that voters are increasingly animated by potential Supreme Court nominees, and this energy has led to pressure on Biden to mirror Trump in releasing a list of judges he would nominate to the top court should he win the election. But Biden refused to do so Sunday, describing such lists as “a play to gin up emotions and anger.” He went on to say he didn’t want to release a list to prevent judges from suffering partisan attacks, and that he wants to pick not partisan justices but people both parties respect.

Biden did repeat one specific pledge he has made previously, however, promising that his first Supreme Court nominee “will make history as the first African American woman justice.”

Ultimately, Biden argued that Ginsburg’s death emphasized how important voting in the upcoming election is, and how it clarified what is at stake.

He listed the coronavirus pandemic, the recession, the racial justice reckoning, and global warming as defining issues in American politics — and ones in which the Supreme Court has a large role to play.

“The last thing we need is to add a constitutional crisis that plunges us deeper into the abyss, deeper into the darkness,” he said. “The infection this president has unleashed on our democracy can be fatal. Enough. Enough.”

Biden has led in national polls in the weeks leading up to the election. But his message Sunday was clear: Supreme Court nominations are an important factor for voters to consider when deciding whom to vote for in November.