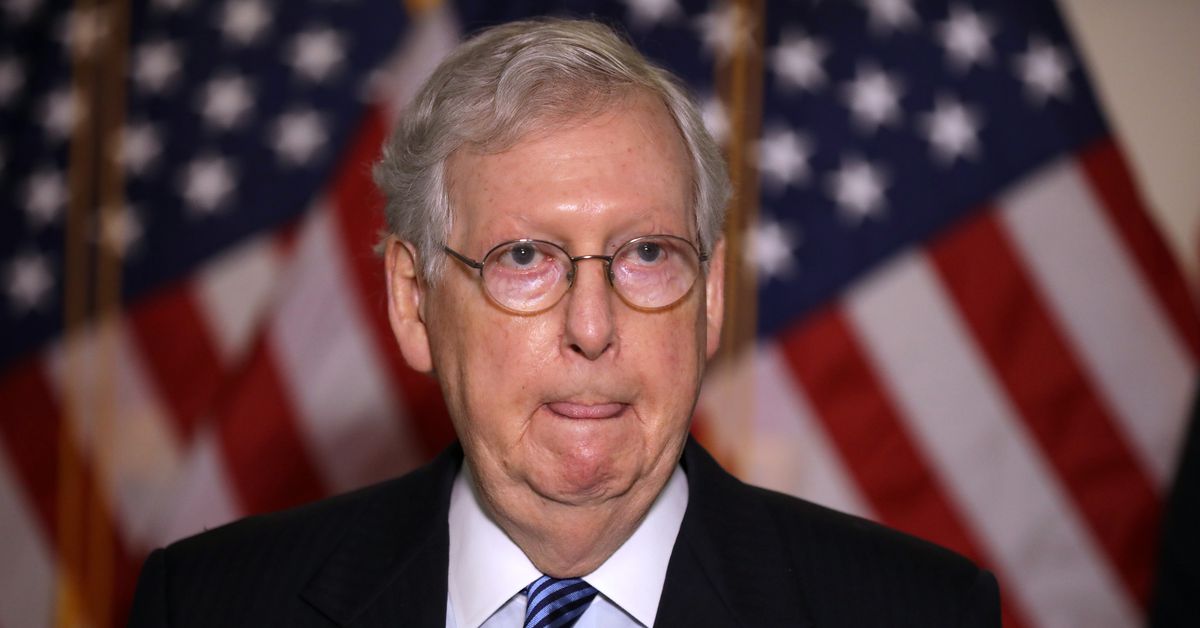 The question of whether President Donald Trump will get to fill the late Supreme Court Justice Ruth Bader Ginsburg’s seat this year — either before the election or even after it, if he should lose — is entirely up to Senate Republicans.

There are 53 Republican senators. Confirmation of a nominee would take 50 Senate votes, plus a tiebreaker vote from Vice President Mike Pence. Democrats are likely to remain united in opposition to any Trump effort to fill the seat, but they can’t stop the GOP by themselves. They’d need to convince at least four Republican senators to join them — to agree to let the winner of the next election fill Ginsburg’s seat.

Justice Ginsburg said days before her death that her “most fervent wish is that I will not be replaced until a new president is installed,” according to NPR. But Senate Majority Leader Mitch McConnell said Friday that President Trump’s nominee to replace Ginsburg “will receive a vote on the floor of the United States Senate.”

There are two main possibilities for when he’d hold such a vote — before the election or in the lame-duck period after it stretching from November to January. Either option would be controversial, but the latter would be particularly so if Biden wins and if Republicans lose their Senate majority; Republicans would effectively be thumbing their noses at the election results.

As it so happens, a few GOP senators are on the record saying they would oppose filling a Supreme Court vacancy this year. (The question has often been posed given McConnell’s refusal to hold a vote to replace Justice Antonin Scalia after he died in 2016, while Barack Obama was still president.) But, of course, those assurances were given when the question was hypothetical, and it’s far from clear whether these senators will stick to them in the face of what’s certain to be intense pressure from the right.

On Friday, before news of Ginsburg’s death broke, Sen. Lisa Murkowski (R-AK) reportedly told Alaska Public Media that she wouldn’t vote to confirm any new justice until after Americans decide who the next president will be.

Sunday, Murkowski said she stands by her previous statements: “Sadly, what was then a hypothetical is now our reality, but my position has not changed.”

Last month, Sen. Susan Collins (R-ME) told the New York Times’s Jonathan Martin that she would not vote to confirm a new justice in October because that would be “too close” to November’s election. She added that, should Trump lose, she wouldn’t vote to confirm a new justice in the lame-duck session, either. And on Saturday, Collins said the confirmation process should go forward, but the Senate shouldn’t vote on a nominee until after the election. “The decision on a lifetime appointment to the Supreme Court should be made by the President who is elected on November 3rd,” she said in a statement.

Both Murkowski and Collins are known for defecting from their party on certain key votes (though not others, like on impeachment) — for instance, together with the late Sen. John McCain, they derailed President Trump’s effort to repeal Obamacare in 2017.

Next on the list of possible GOP defections would likely be Sen. Mitt Romney (R-UT), who has clashed with President Trump and expressed concern about political norms. But Romney does not appear to have said what he’ll do in this situation. His office told CNN he wouldn’t comment on the timing of a vote Friday.

Even if Collins, Murkowski, and Romney all firmly committed to let the winner of the election pick the nominee (a scenario that is far from a sure thing), that wouldn’t be enough — Democrats need a fourth vote, and finding one could be very difficult indeed.

In 2018, Sen. Lindsey Graham (R-SC) said, “If an opening comes in the last year of president Trump’s term and the primary process has started, we’ll wait to the next election.” But this May, Graham changed his tune, suggesting that a hypothetical vacancy this year would be “a different situation” from the Scalia vacancy. And on Saturday, Graham tweeted that he “will support” Trump “in any effort” to fill Ginsburg’s seat. Graham is the chair of the Judiciary Committee and will have a major role in determining how this plays out.

Sen. Chuck Grassley (R-IA) has said that, if he was still Judiciary Committee chair, he wouldn’t hold a hearing on a nominee this year. But that statement is meaningless, because Graham has succeeded him as the committee chair. Grassley has not committed to vote against any nominee.

Another possibility would be the retiring Sen. Lamar Alexander (R-TN), but he is a close McConnell ally. For another high-profile vote this year — whether to call witnesses at President Trump’s impeachment trial — he ended up siding with McConnell.

There are also a few wrinkles with the timeline for when such a vote would be held.

The simplest possibility would be for McConnell to hold a vote before the November 3 election. However, in his statement promising a floor vote on Trump’s nominee, he did not commit to that timeline. There’s much speculation that McConnell might prefer to keep the seat open to boost Republican turnout in key Senate races, or to avoid putting his endangered senators on the spot.

If Trump wins the election and Republicans hold on to their Senate majority, then, they would be able to vote on Ginsburg’s replacement whenever they like. But if Biden wins, or if Democrats take the Senate, that means the clock would be ticking for Republicans to ram through a nomination in the lame-duck period before those changes take place, amid what’s sure to be enormous public outcry.

The new Senate will be sworn in on January 3, and the president’s inauguration day is on January 20. So if Democrats win the Senate, McConnell would have until January 3 to hold his vote. If the GOP holds on to the Senate but Biden wins, they’d have till the 20th. There are some further complications, though.

One wrinkle is the Arizona Senate contest, which is a special election. Republican Sen. Martha McSally currently holds the seat. But if the Democratic nominee, Mark Kelly, defeats her, he will likely be seated before the other new senators — once the results of the election are certified, which could be in late November or December. That means Republicans would lose a vote. However, if McConnell is hell-bent on getting a nominee confirmed anyway, this probably wouldn’t be an obstacle — he can just make sure to hold the vote before Kelly is sworn in.

Another complication is a possible runoff for the Georgia Senate contest pitting Sen. David Perdue (R) against Jon Ossoff (D). If no candidate tops 50 percent of the vote on election day, the runoff would be on January 5, meaning that seat would become vacant at the start of the new Senate on January 3.

Of course, it’s also possible that one or more very close Senate races could be contested — the 2008 Minnesota Senate election wasn’t decided until the summer of 2009, after a recount and court decisions.

So the safest bet for McConnell, if he doesn’t hold a vote before the election, would be to hold the vote in November or December. Many would be outraged if Republicans are seen as defying the election results, particularly after Republicans stressed the importance of abiding by those results in 2016. Some Democratic pundits are already musing about threatening to abolish the legislative filibuster or pack the courts in response, if Republicans push a nominee through.

But practically, even an outgoing Senate Republican majority would be able to do what it wants in the lame-duck period — if they want to burn down institutional norms on their way out, no one can stop them.