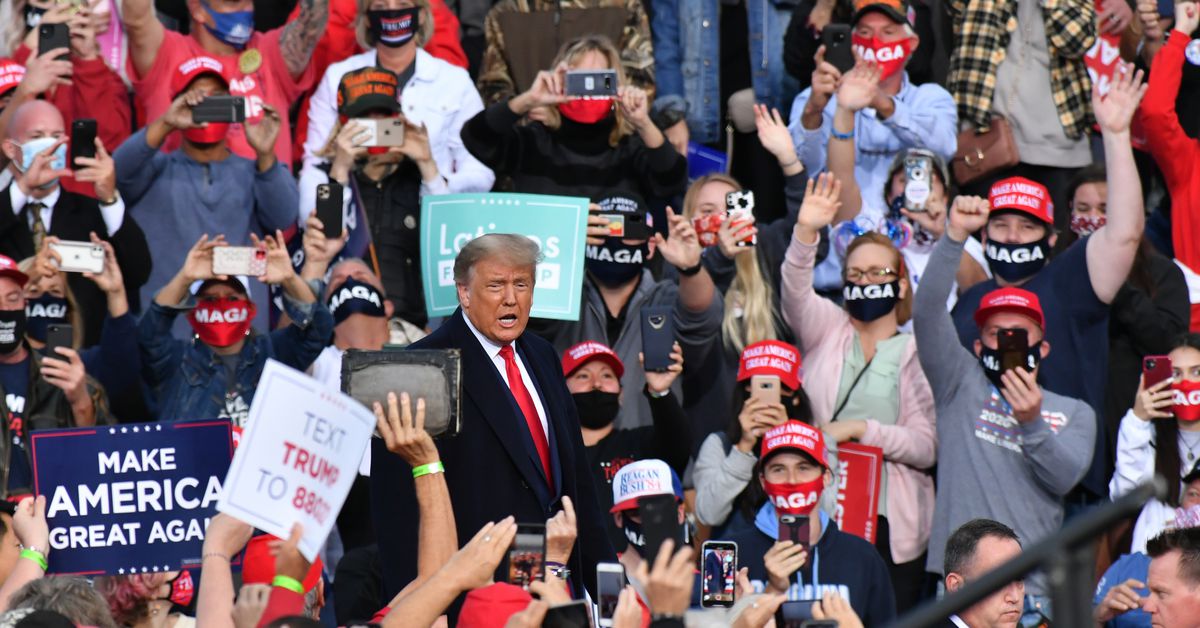 At rally Saturday night in North Carolina, President Donald Trump promised a fired-up crowd chanting “fill that seat” that he will be nominating a woman to replace the late Supreme Court Justice Ruth Bader Ginsburg this week.

Trump begins by saying nice things about Ruth Bader Ginsburg. Trump’s audience isn’t thrilled about it but politely refrains from booing. But he immediately pivots to how he plans to quickly fill the seat, prompting huge applause & chants of “fill that seat” that he encourages. pic.twitter.com/AHyhtxN2Rx

“I actually like women much more than I like men,” Trump said to cheers, and encouraged his supporters to make “Fill that seat!” T-shirts.

Trump also touched upon more familiar themes over the course of his campaign rally in Fayetteville — which marked his fourth visit to the battleground state of North Carolina in as many weeks — celebrating violence against the media, spreading falsehoods about the coronavirus, and attacking school history curricula that he claimed are not “pro-American,” but rather “toxic left-wing propaganda.”

The energy of the campaign event epitomized how the president has been capitalizing on Ginsburg’s death — and the vacancy on the Supreme Court it created — as an opportunity to excite and mobilize his political base amid a series of crises that have reduced his odds of reelection, according to months of national polling.

Trump began his remarks by offering a brief, nonpartisan note of appreciation for Ginsburg, who died on Friday due to complications related to pancreatic cancer.

“You may agree, you may not disagree with her, but she was an inspiration to a tremendous amount of people; I say all Americans,” Trump said, evoking relatively quiet clapping from the audience.

Moments later, Trump said, “So, Article II of our Constitution says the president shall nominate justices of the Supreme Court,” and received a huge roar of applause.

Trump described his proposal to move quickly on a nomination as a matter of course, and said previous presidents have filled vacancies on the court “every single time.”

He did not mention that Senate Republicans blocked former president Barack Obama’s Supreme Court nominee to replace Justice Antonin Scalia, who died in February 2016. At the time, Senate Majority Leader Mitch McConnell said the “vacancy should not be filled until we have a new president” given that it was an election year. McConnell has since discarded that theory, arguing that having a Republican-controlled Senate and White House means voters have given the GOP a mandate to install judges as it sees fit.

Trump at one point asked the audience to cheer in response to his questions as to whether he should choose a woman or a man for his Supreme Court nominee, and received a significantly louder response for a woman nominee. He referred to this method as a “very scientific poll” and deemed it “a lot more accurate” than professional polling.

Trump likely sees a woman nominee as an opportunity to appeal to those suburban women who have soured on Trump over the course of his presidency, and have become a highly-coveted demographic in swing states.

Trump also seemed to imply during his speech that replacing Ginsburg was important in order to decide the outcome of a disputed election, saying, “Now we’re counting on the federal court system to make it so that we can actually have an evening where we know who wins — not where the votes are going to be counted a week later, two weeks later.”

The question of whether Ginsburg’s spot will be filled comes down to whether Senate Republicans can unite on the act of voting for a nominee at a politically sensitive moment — a little more than a month before fiercely competitive elections, which could result in Republicans losing their majority in the upper chamber.

McConnell and most of his Republican colleagues have signaled they’re keen to work quickly to do so, but it’s not yet clear if Republicans have the 50 votes they will need to secure the nomination (with Vice President Mike Pence providing a tie-breaking vote).

Over the course of his speech, Trump repeatedly took aim at one of his favorite political adversaries: the press. He joked about MSNBC anchor Ali Velshi being struck by a rubber bullet while covering George Floyd protests in May and complained that television outlets don’t cover him correctly.

Trump also celebrated the decline of the credibility of mainstream media outlets as a major accomplishment of his tenure. “You see what their approval rating has gone to? I think it’s one of my greatest achievements,” he said.

“You see what their approval rating has gone to? I think it’s one of my greatest achievements” — Trump says diminishing the credibility of the media is one of his top accomplishments pic.twitter.com/B4cNLtCc3z

As he has done at a number of recent rallies, Trump made false and puzzling statements about the coronavirus pandemic. He falsely stated that the Democrats “don’t want the vaccine” to counter Covid-19.

Trump was likely trying to make a point about skepticism of his promises to ensure a vaccine is approved before Election Day. But those concerns are not about a vaccine per se, but the safety of it — most Democrats, most independents, and a sizable chunk of Republicans across America are worried that political pressure and a hasty trial process could result in an unsafe vaccine.

“If all the protocols had been followed and the evidence is in, of course, I’d follow science. It doesn’t matter when it happens,” Democratic Washington Gov. Jay Inslee told the Associated Press recently, in comments indicative of the position most Democratic leaders have on a possible vaccine. “But I would have to look at the science, not Donald Trump. There isn’t one single thing I would ever trust from Donald Trump to be true.”

Trump also incorrectly implied once again that mass testing was inflating case numbers, saying “When you test, then you have — does this make sense? — then you have cases.” But over the course of the summer, work by Pro Publica, Stat News, Vox, and other publications showed that increases in testing capacity alone did not explain the increasing number of cases across the US.

“When you test, then you have — does this make sense? — then you have cases” — Trump still seems to think that coronavirus testing causing illness, which is batshit pic.twitter.com/nHxVv89Rb8

Trump also spent time denouncing “toxic left-wing propaganda in our schools,” a reference to his ongoing culture war against the 1619 Project, a New York Times Magazine collection of essays that place slavery at the center of narratives of American history, and which some school districts have included in their teaching materials. Trump, who has routinely rejected the role racism has played in shaping the United States, said Saturday, “We are taking school funds away from these crazy schools that are teaching horrible things.”

In place of lessons that acknowledge the ugly parts of American history, Trump championed his recently-announced “pro-American lesson plan” called the 1776 commission.

“We will teach our children the truth about America,” Trump said Saturday. “That we are the most exceptional nation on the face of the earth and we are getting better every single day.”

Though the president presented this plan for education, he did not detail what steps he will take to ensure the toll exacted by the pandemic will decrease every single day, as the US approaches 200,000 confirmed deaths.