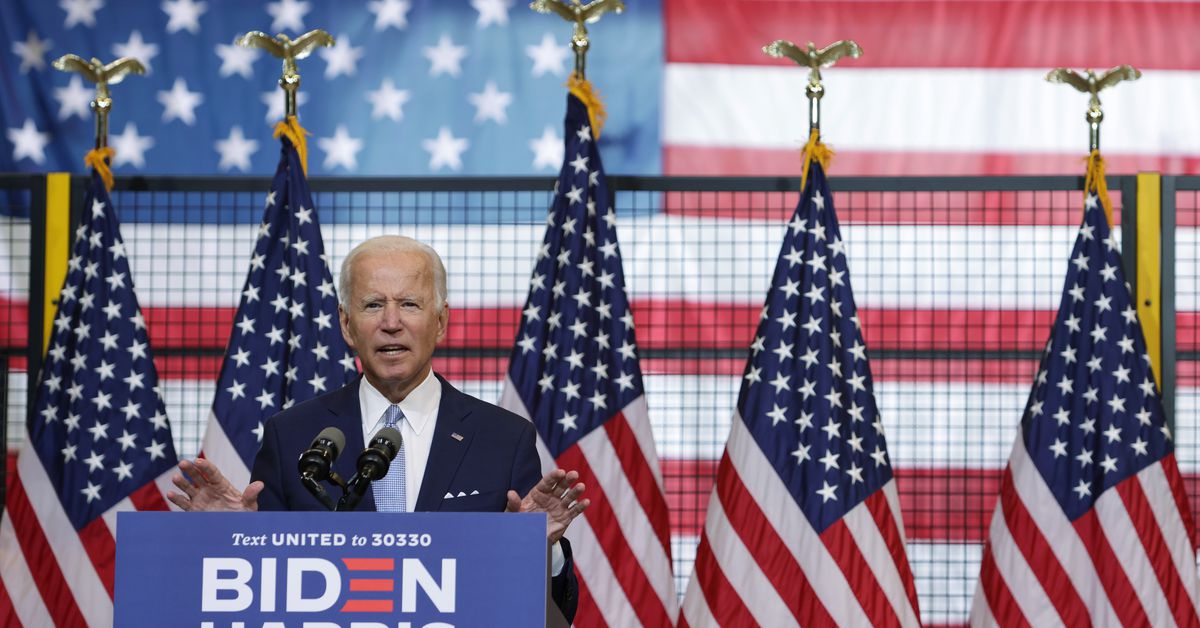 Democratic presidential nominee Joe Biden took to the stage in Pittsburgh, Pennsylvania, on Monday to point out an obvious fact: He is not yet the president.

He did so to offer a rebuttal of last week’s Republican National Convention, which saw current President Donald Trump and dozens of other speakers talk about nationwide protests — and the violence that has sometimes been adjacent to them — as demonstrating the lawlessness of “Joe Biden’s America” as they painted vivid pictures of the absolute chaos that would befall the country if Biden was elected in November.

“No one will be safe in Biden’s America,” Trump said in his RNC address last week. “Make no mistake, if you give power to Joe Biden, the radical left will defund police departments all across America. They will pass federal legislation to reduce law enforcement nationwide. They will make every city look like Democrat-run Portland, Oregon.”

Biden does not support defunding police departments; his criminal justice plan calls for a $300 million investment in the Community Oriented Policing Services program to strengthen community policing, as well as attaching contingencies on federal aid for police departments to enforce certain standards of conduct. But that fact did not stop the president from making further efforts to link Biden to unrest over the weekend.

Biden’s speech today was meant to remind voters they are actually living in Donald Trump’s America.

As Biden pointed out, the unrest in cities across the country is happening under Trump’s watch. And Biden also highlighted that Covid-19 has claimed more than 180,000 American lives, many schools aren’t reopening due to the pandemic, and the economy remains sluggish with millions still relying on unemployment insurance to pay their bills.

“These are not images of some imagined Joe Biden America of the future — these are images of Donald Trump’s America today,” Biden said. “He keeps telling you, if he was president, you’d feel safe. Well, he is president — whether he knows it or not.”

The vice president’s speech comes after another week of national unrest resulting in deadly shootings; one in Kenosha, Wisconsin, amid protests responding to the police shooting of Jacob Blake, and another in Portland, Oregon, over the weekend. In both, the deadly violence broke out after protesters clashed with armed militia members supportive of President Trump.

Details are still emerging, but the [Portland] victim is believed to be Aaron Danielson, a supporter of the far-right Patriot Prayer group; according to Willamette Week reporter Aaron Mesh, the victim was wearing a hat and shirt with the group’s logo.

The shooting comes after supporters of President Donald Trump led a caravan of vehicles through the city Saturday and clashed with anti-police brutality protesters in Portland’s downtown; video from journalist Cory Elia shows trucks flying Trump flags driving through people on a street and unleashing pepper spray as the vehicles forced their way through a crowd of protesters.

The killing follows another instance of deadly street violence from just days ago: On Tuesday, a 17-year-old Trump supporter allegedly shot and killed two protesters in the city of Kenosha, Wisconsin, and injured a third. Kenosha has been the site of major protests since police shot Jacob Blake, a Black man, at least seven times in the back on Sunday, leaving him paralyzed from the waist down.

On Monday, Biden issued a full-throated condemnation of some of the recent riots in American cities that have broken out following peaceful protests over police brutality in the cases of Blake, George Floyd, Breonna Taylor, and many others. While Trump and Republicans have accused Democrats of embracing riots, Biden made it clear he sees a clear distinction between riots and peaceful demonstrations and is staunchly opposed to the former.