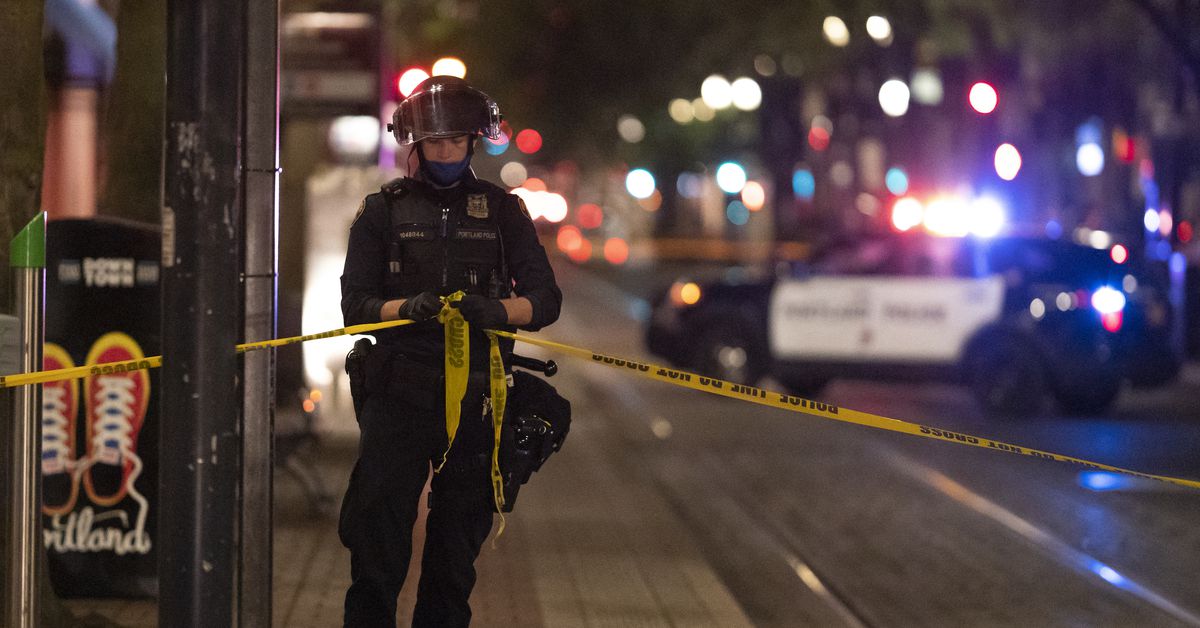 A shooter killed one person in Portland, Oregon on Saturday night, according to a statement by the Portland Police Bureau.

Much is still unknown about the shooting, but the victim — a white man — appears to have had some connection to the far-right Patriot Prayer group; according to Willamette Week reporter Aaron Mesh, the victim was wearing a hat and shirt with the group’s logo.

The shooting comes after supporters of President Donald Trump led a caravan of vehicles through the city Saturday and clashed with anti-police brutality protesters in Portland’s downtown; video from journalist Cory Elia shows trucks flying Trump flags driving through people on a street and unleashing pepper spray as the vehicles forced their way through a crowd of protesters.

At least 10 arrests were made Saturday by Portland police on a variety of charges, including disorderly conduct and “interfering with a peace officer,” but none have been made in connection with the shooting.

The killing follows another instance of deadly street violence from just days ago: On Tuesday, a Trump supporter, 17-year-old Kyle Rittenhouse, shot and killed two protesters in the city of Kenosha, Wisconsin, and injured a third. Kenosha has been the site of major protests since police shot Jacob Blake, a Black man, at least seven times in the back on Sunday, leaving him paralyzed below the waist.

Early Sunday, Trump issued a string of tweets and retweets, including one retweet and a tweet condemning Portland Mayor Ted Wheeler’s leadership of the city. “The National Guard is Ready, Willing and Able” to deploy, Trump wrote in a quote tweet shortly after calling Wheeler a “fool.”

Trump has attempted to paint himself as the “law and order” candidate ahead of the general election in November, and all signs point to his campaign believing that more violence is good for the president’s reelection chances.

Specifically, senior adviser to the president Kellyanne Conway told Fox & Friends on Thursday that “the more chaos and anarchy and vandalism and violence reigns, the better it is for the very clear choice on who’s best on public safety and law and order” — an odd message given the violence is happening under the Trump administration, and Democratic nominee Joe Biden hasn’t held elected office since January 2017. Trump himself has argued that increasing unrest and recent violence is the result of Democratic leadership on the local level rather than the result of any of his policies or rhetoric.

Portland has been the site of continuous Black Lives Matter protests for approximately three months following the police killing of George Floyd in Minneapolis, Minnesota in May this year. Federal agents were deployed to the city in July this year, and armed far-right protesters have been a frequent presence as well.

The story is still developing. Here’s what we know, and don’t know, so far.