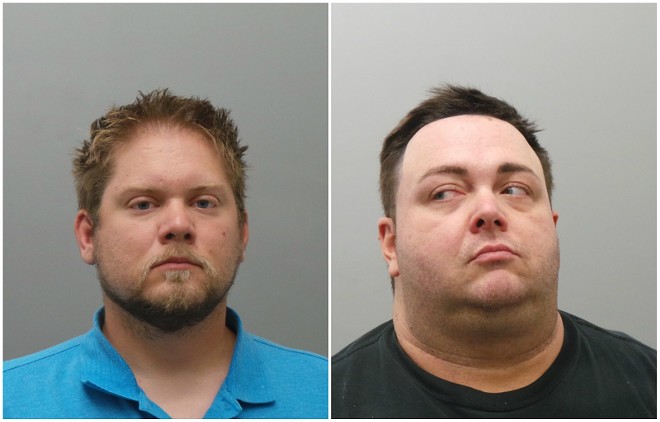 Two Velda City cops have now been indicted on felony assault charges after shooting a man during a traffic stop.

In February, officers Matthew Schanz and Christopher Gage pulled over the man for an expired license, and when he tried to drive away, they opened fire, according to charging documents. The 37-year-old driver was wounded but survived.

St. Louis County Prosecuting Attorney Wesley Bell announced a month ago during a news conference that he had issued warrants for the two officers. In a bizarre scene, Schanz crashed the news conference that day outside of the jail, questioning Bell and then giving reporters his version of the shooting.

On Wednesday, a grand jury indicted Schanz and Gage on charges of first-degree assault and armed criminal action.

According to charging documents, after pulling over the man in February, the officers claimed to smell marijuana and told him they planned to search his car. He drove off instead, turned around at the end of the dead-end street, and drove back. Schanz had moved to a nearby parking lot and called in on the radio that the car was trying to run them down. He then stepped back into the road and in front of the vehicle, yelled at it to stop and started shooting, authorities say. He continued shooting into the car as it drove around him. Gage also fired on the vehicle as it drove away, authorities say.

The wounded driver crashed shortly after and was taken into custody. Schanz was previously arrested in 2013 and fired from the St. Louis Metropolitan Police Department following a domestic dispute.