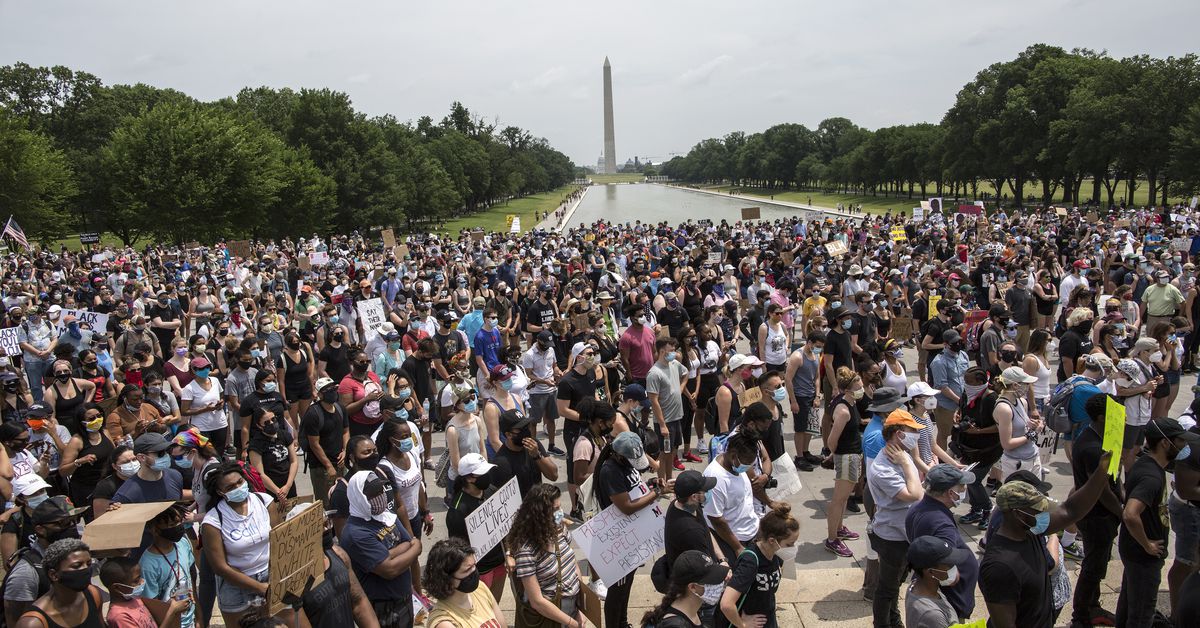 On the granite steps of the Lincoln Memorial are carved two footprints. An inscription notes this spot was where Martin Luther King Jr. delivered his “I Have a Dream” speech in front of thousands on August 28, 1963.

On Friday, amid a summer of protest against systemic racism and police violence, remarks will again be delivered from that same place by those speaking out against state violence.

Dubbed “Get Your Knee Off Our Necks,” the 2020 March on Washington is expected to draw 50,000 protesters from around the country. It was announced by Rev. Al Sharpton during the June funeral of George Floyd, a Black man who died after a white officer kneeled on his neck for longer than eight minutes. Then this week, another nationwide wave of protests broke out after Kenosha, Wisconsin, police shot 29-year-old Jacob Blake in the back multiple times, revitalizing the movement to get out into streets during a time when the physical, emotional, and economic health of Black Americans has disproportionately been impacted.

The march — organized by Sharpton’s National Action Network along with the NAACP, the National Urban League, the Hispanic Federation, clergy groups, unions, and civil rights groups — will include speeches by Sharpton, Martin Luther King III, and relatives of those killed by police, including Floyd, Breonna Taylor, Eric Garner, and others. After initial criticism from activists over the exclusion of families of local victims of police violence, several DC-based family members will also speak.

Although organizers initially expected 100,000 protesters to attend the day of speeches at the Lincoln Memorial in Washington, DC, the district’s coronavirus quarantine travel restrictions ended up cutting that number in half. Residents of nearby Maryland and Virginia are exempt from the district’s quarantine order, though, and tour buses from several northeastern states, like New York and New Jersey, are also exempt, according to the Washington Post. Several groups from other cities who have been organizing protests throughout the summer, like in Louisville and Atlanta, are also traveling to attend the rally.

To deal with the pandemic, everyone attending will be subject to a mandatory temperature check upon entry. Masks will be mandatory in the protest area, and anyone seeking to gain entry without one will be provided with a mask. There will also be 20 hand sanitizer stations, according to protest organizers.

Marchers are expected to starting gathering on the National Mall around the reflecting pool at 7 am Friday, and speakers will begin addressing the crowd from the steps of the Lincoln Memorial at around 11 am. Prior registration is required for all attendees. For those not able to be there in person, the event will be streamed online in full by the NAACP.

This year’s march marks the 57th anniversary of King’s famous speech, which was attended by approximately 250,000 people.

Originally conceived as a protest for jobs, the march quickly morphed into a wider protest for racial justice after a summer of police beatings of civil rights activists working against the disenfranchisement of Black voters.

While King’s speech is most remembered for his iconic finish in which he laid out his vision for a future of racial equality in the US, he also spoke to the urgency of now — a lesson that can apply just as much today as it did back then. “This is no time to engage in the luxury of cooling off or to take the tranquilizing drug of gradualism,” he said. “Now is the time to make real the promises of democracy. Now is the time to rise from the dark and desolate valley of segregation to the sunlit path of racial justice.”

His words still ring true as the country marches in the streets against police brutality. “There are those who are asking the devotees of civil rights, ‘When will you be satisfied?’ We can never be satisfied as long as the Negro is the victim of the unspeakable horrors of police brutality,” he said.