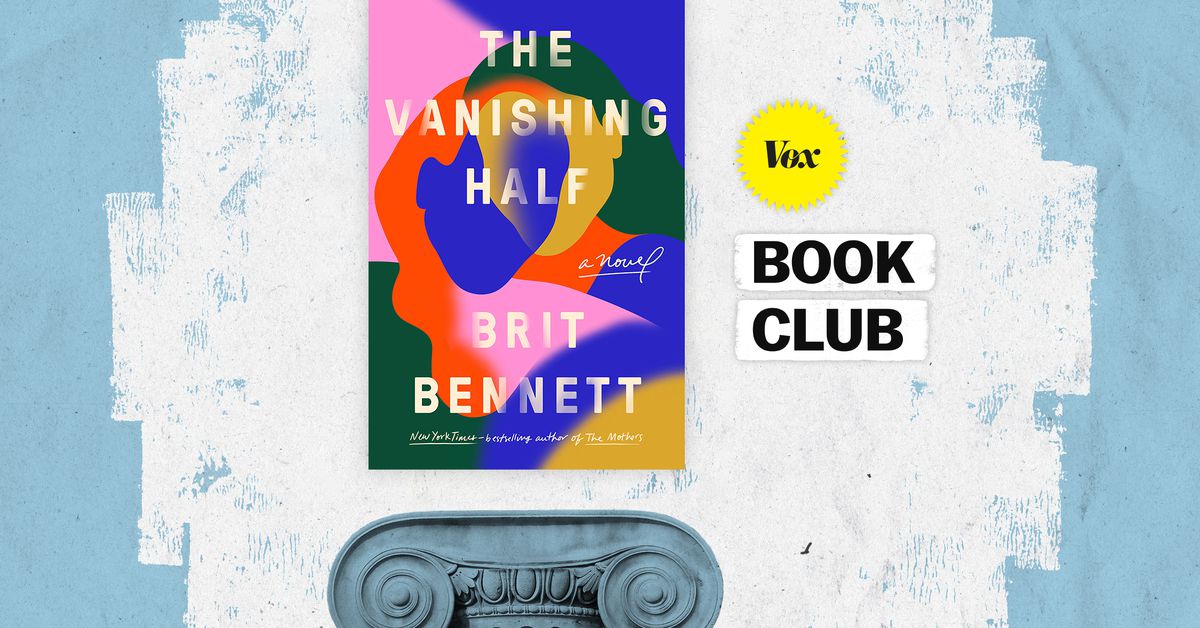 The Vox Book Club is linking to Bookshop.org to support local and independent booksellers.

In Brit Bennett’s The Vanishing Half, the character of Stella haunts the narrative like a ghost. Stella is the half who vanished: half of her family, half of her sister’s heart. And she vanished by excising half of her own identity.

Stella is a light-skinned Black woman, and when she is 16, she decides to start passing for white. Her identical twin sister Desiree, meanwhile, grows up to marry the darkest-skinned man she can find. Stella breaks away from her family, and we don’t get a chance to meet her on the pages of the novel until nearly halfway through the book when at last her niece, Desiree’s dark-skinned daughter, tracks her down. It’s only in that last section that we finally learn exactly what happened to Stella.

Stella’s fate haunts the novel, and so does the genre her story belongs to. There’s a long history of narratives of racial passing in the American novel, and The Vanishing Half plays with the genre in new and interesting ways. So as the Vox Book Club spends the month talking about The Vanishing Half, I wanted to put it in the context of the passing novel more broadly.

To get an expert view, I called up Alisha Gaines, an English professor at Florida State University and the author of Black for a Day: White Fantasies of Race and Empathy. Together, we talked through the history of the African American passing novel, what passing looks like after Jim Crow (sorry, Ben Shapiro), and how passing novels can show us how race is produced and reproduced. Below is a transcript of our conversation, lightly edited for length and clarity.

Do we know when the first of these narratives emerged? How old are stories about racial passing?

It’s an old story. In literature and in life, America has a fascination with impersonation, which includes blackface minstrelsy. And passing narratives, if you want to be technical about it, in African American literature, they start with the slave narrative.

A good example of that would be William and Ellen Craft running a thousand miles for freedom. This happened in 1848. Ellen was light enough to pass. She dresses up as a land-owning white man, and she then escapes her slavery with her husband while she is dressed as a man. She’s also performing various disabilities. She pretends to be Deaf. She has her arm in a sling so she doesn’t have to sign anything, because she can’t. And then her husband is her personal valet-butler kind of person. She basically gets on a train and goes up out of slavery based on the fact that she can pass.

It’s a narrative that I think is particularly useful for thinking about African American literature, African American cultural production, because it doesn’t allow us to take Blackness for granted. When you destabilize the category of Blackness through passing, you can ask different, more interesting questions.

Could you tell me a little about what passing looks like after Jim Crow, for those like Ben Shapiro who do not know?

Passing for white has never left. There was a moment during the civil rights movement — and Gayle Wald discusses this in her book Crossing the Line — where there would be these bursts of people saying, “I’m done with passing.” Folks who had been passing, but then seeing the gains of the civil rights movement, there are these splashy spreads in Black periodicals like Ebony and Jet where they would announce their triumphant return to Blackness. The same Black periodicals would also run spreads with various light-skinned folks, and you would have to guess who was the actual Black person and who was a white person.

The thing about passing that folks need to understand is that we’ll never have “accurate numbers,” because the whole point is you’ll never have an audience for it. If someone knows you’re passing, your passing has failed! The point is to never be found out. If you’re found out, you’re vulnerable to violence. It’s not as if people are saying, “Hello, I’m passing!” That’s impossible.

We know that folks are still passing because in 1999 Lawrence Otis Graham releases this book Our Kind of People: Inside America’s Black Upper Class. The whole thing is about the secret world of the Black upper class. He’s got a chapter called “Passing for White” in which he distills a list on how to pass that he gained from having so many conversations with wealthy Black folks who had family members who could pass and who opted to pass.

That book was published in 1999! The idea that this has gone away and that now it’s white folks doing the opposite is laughable.

Moving back to the idea of passing as a literary genre, is there a classic, recognizable structure to passing narratives?

Yes, and then that structure gets messed with. It sounds like with The Vanishing Half, Brit is messing a little bit with it. Danzy Senna’s book Caucasia does the same thing.

There’s this literary archetype of the tragic mulatto, which is not something you would call someone in real life. Usually it’s a woman. It’s very gendered, with a couple of exceptions, like The Autobiography of an Ex-Colored Man by James Weldon Johnson.

But it’s usually a woman, and she’s caught between two worlds. She’s not Black enough; she’s not white enough. She’s usually undone in some perilous way. We see this in Nella Larsen’s Passing in 1929. We see this in Imitation of Life in 1933. There’s this tragedy. Usually it’s a death, the murder or suicide of the mixed woman.

They often start out with a light-skinned person actually finding out they’re not white, which happens in Iola Leroy in 1892 or The Autobiography of an Ex-Colored Man. They discover the racial truth about themselves, for whatever reason, and then endeavor to navigate choosing whiteness or choosing Blackness. And then there’s a consequence where they’re punished for passing for white.

These generic conventions get played with by a number of different authors. Danzy Senna did in Caucasia. George Schuyler did even earlier than that in Black No More. He’s playing with the idea of Black folks becoming white through a machine. It’s a speculative science book, so it’s not based on what you already look like. You can pay 50 bucks and be Black no more.

As these stories evolved over time, are there any specific tropes that really shifted? Has the attitude toward the person who is passing changed?

What really changes is that tragic mulatto literary archetype. People deliberately started messing with that character.

Imitation of Life — which is not by a Black person; Fannie Hurst is white — it got remade twice into two different films. In Imitation of Life, it’s not the passing character who dies. It’s her mother who dies of a broken heart. The great tragedy is that her refusal to embrace her own Blackness kills her mom. Then there’s Caucasia, which does some really interesting stuff and was published in 1998. It’s got a white mom, a black dad, and two daughters. One can pass and one cannot. It sounds like a similar thing is operating in Brit’s book.

Yeah, it’s a similar idea. In The Vanishing Half the whole family is Black and light-skinned. The protagonists are identical twin sisters, and one chooses to pass and one chooses not to.

Yes, similar. In Caucasia, they’re not twins. One can pass and one, there’s no way. She looks more mixed in the way that we think about it.

It’s set in the ’70s, during Black Power and all that kind of stuff. And the parents have to go on the run from the FBI. The white mom takes the white-looking child, the Black dad takes the more Black-looking child, and they split.

So instead of this desperate desire to be white on the part of the character of Birdie, the white-looking protagonist, it’s placed on her and then ultimately rejected. Birdie spends a lot of time in the novel desperately wanting to be seen as Blacker, and then has to go on the run with her white mom and therefore pass as Jewish.

And that deconstruction of the archetype also happens a bit in The Vanishing Half, although Stella chooses to pass. But there’s no great tragedy that ends up punishing her for her deception. And in the end she just keeps living her life, only now her daughter knows the truth and her sister knows where she lives.

You touched on this a bit earlier when you talked about the history of passing narratives being a way of understanding the history of African American literature, but I wanted to widen out a bit here at the end. What do you think tends to draw people to stories about racial passing? What cultural ideas are embedded in these stories?

Folks are drawn to — and I’m particularly drawn to — passing narratives because they destabilize our sense of who we are. They also help us think through other categories of identity. If race isn’t as stable as we want to think about it, maybe sexuality isn’t either, or gender.

They can also speak to an anxiety that Americans have around really defined and concrete racial categories that get animated at different moments for various different political reasons. We know Black folks pass for white for survival, to be free from racial persecution. That is in the literature as well. And it’s also in the literature that we want to have some flirtation with the seduction of white privilege for white-passing folks, too.

Thinking about who we are at various historical moments, and thinking through what race means and how it is produced and reproduced, all of that is in the African American passing narrative.

There’s a lot to dig into here, so I’m going to turn it over to you, book clubbers. Let us know what you think about The Vanishing Half and how it fits into the history of passing stories in the comments down below.

You can meet us back here again next week for another conversation, and on Thursday, August 27, I’ll be talking with Bennett live on Zoom. You can RSVP here, and make sure to sign up for the Vox Book Club newsletter to be sure you don’t miss a thing.