Palm Springs city and business leaders are mulling whether to close some of Palm Canyon Drive to vehicle traffic to allow for ample physical distancing and outdoor dining during the coronavirus pandemic.

Around 80 people tuned in to a city Zoom meeting on Tuesday about potential plans to expand outdoor patio dining to parking lanes along a stretch of the city’s main thoroughfare.

This idea would allow for more space between tables, and more room for pedestrians to walk 6 feet apart. Jeffrey Bernstein, owner of the downtown retail shop Destination PSP said it also could offer the opportunity to create a plaza-style public space with outdoor dining, retail booths and public art.

“There’s a lot of new homeowners that have been in town, and locals staying here and have no place to go,” he said. “We have a unique opportunity now to create that kind of atmosphere.”

Bernstein said a full closure would allow people to be outside without crowding each other. Restaurants will need the additional dining space, he said, with more guests in the fall once temperatures cool down.

“We need to re-imagine what Palm Springs is,” Bernstein said.

Another stakeholder’s meeting will be held in several weeks to go over more options, giving time for city staff to look into closing a stretch of the road, according to City Councilmember Dennis Woods. Such a decision would be voted on by the Palm Springs City Council. Their next meeting is Sept. 10 at 5:30 p.m.

In the meantime, restaurants can apply for a permit with the city to temporarily use public sidewalks, parking spaces and private outdoor spaces for an additional outdoor dining area.

Parklets for dining, and narrowed lines

Woods on Tuesday presented the proposal to narrow Palm Canyon Drive to two lanes from Tahquitz Canyon Way to Baristo Road, allowing “parklets” for dining where restaurants could set up expanded sections in parking lanes.

Similar concepts have been implemented in places like Laguna Beach and Santa Monica.

“We’re really trying to give people an opportunity to expand in the public right away, to have useable space for their business,” he said.

Initially, the set-up would use large, chunky barriers between the diners and vehicle traffic. The plan would leave 6 feet of sidewalk space in front of businesses. 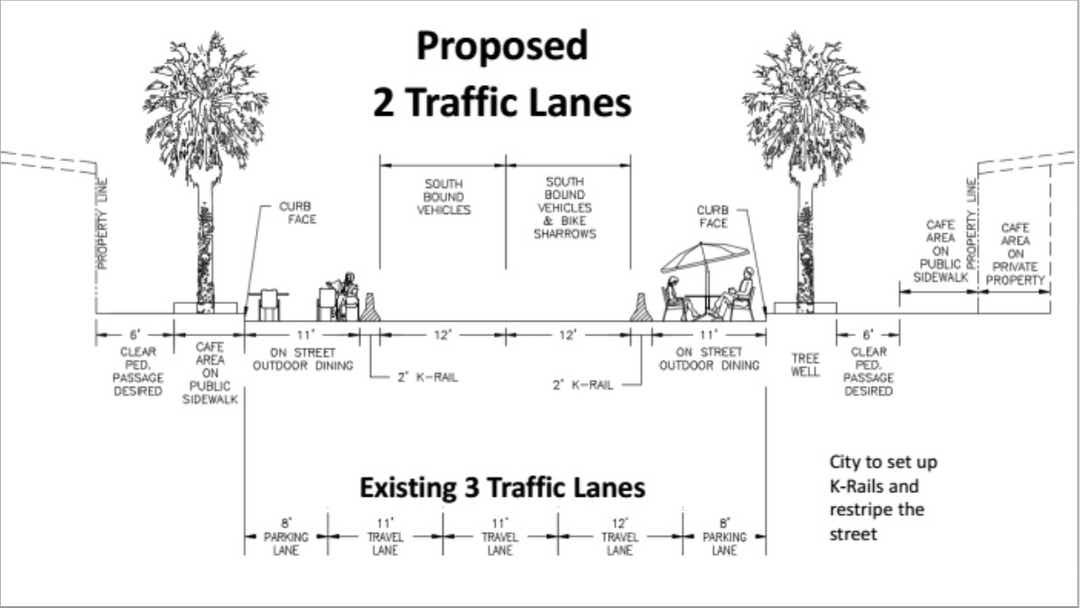 Setting up in the parking lane could allow some restaurants to add three or four tables, Woods said, but it all depends on their location and safety measures. He said the setups could allow restaurants could have designs and furniture that express their personalities.

Some places have already done so with new sidewalk setups: Trio decked out its expanded space in orange and white, while Tac/Quila’s sidewalk tables have tall, red booths on either end with matching umbrellas.

While business owners expressed gratitude that the city is considering different options, some shared concerns that the sidewalks could become too crowded.

Others said the on-street dining plan wouldn’t help out non-food retailers, which might also benefit from expanded footprints.

With concerns about the two-lane plan, some business owners lobbied for closing Palm Canyon completely.

Liz Ostoich, who owns Tac/Quila as well as Farm in La Plaza, said during Tuesday’s meeting that merely narrowing a section of the street could create “winners and losers, which COVID has done across the board.” Tac/Quila is outside the area where the proposal would allow tables to set up in parking lanes.

Bernstein of Destination PSP said he’s concerned about cars getting too close to diners, even with the barriers that the city would provide to cordon off the lanes. A full closure would eliminate that concern, he said.

“I would love, on occasions, to have a booth outside of the store, to be able to expand,” he said.

A full closure of Palm Canyon Drive was routinely implemented for Villagefest, a Thursday night street fair that brought vendors from around the region. 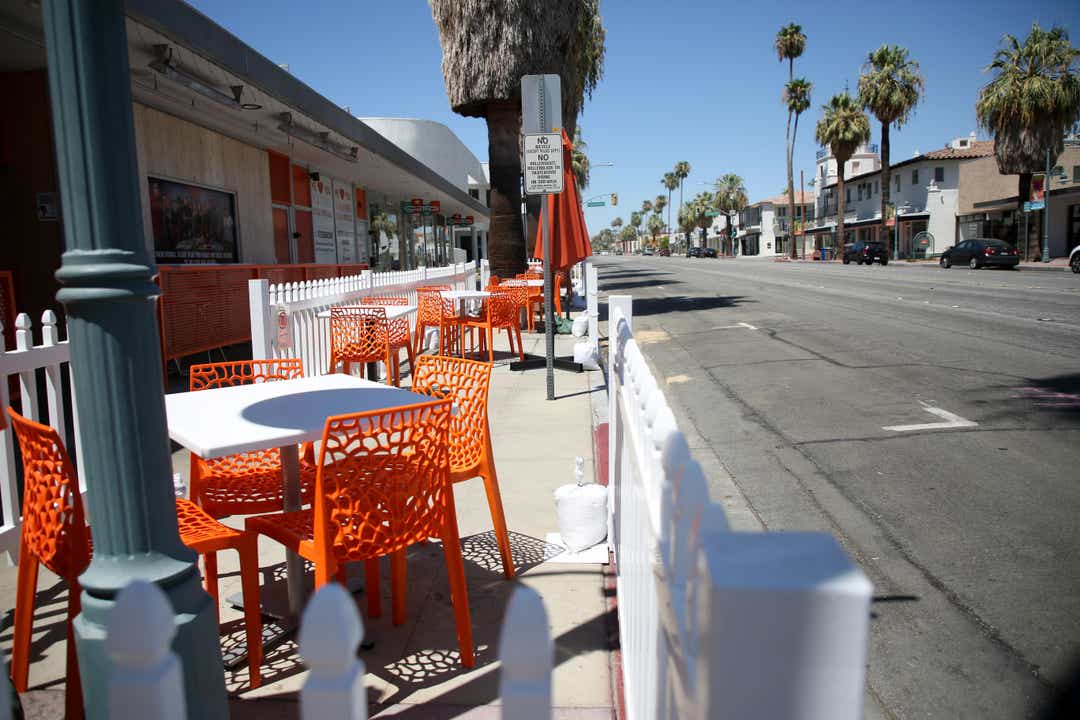 Joy Brown Meredith, who is the president of Main Street Palm Springs group of downtown business owners and owns Crystal Fantasy retail shop and Joy of Life cannabis dispensary, said it could make sense to have different options for different blocks to accommodate various needs.

While on-street dining could help restaurants, it doesn’t necessarily provide aid to struggling retail businesses. One merchant at the meeting expressed concerns that the umbrellas could obscure signage.

“We want to make sure all businesses are treated fairly and with respect,” Brown Meredith said.

Chill Bar owner Rob Giesecke said that while his restaurant isn’t on Palm Canyon Drive — it’s on Arenas — he said he “completely supports” the idea of closing a stretch of that street to vehicles.

The concept of shutting down roads to vehicles to allow more space for pedestrians, cyclists and seating areas isn’t a new one; the public plaza long predates the 20th-century automobile — and the pandemic. But as climate concerns intensify and vehicle-related deaths mount, the “open streets” idea has been adopted in places across the country.

New York City temporarily shut down Broadway through Times Square to traffic in 2009 then adopted the setup permanently. Los Angeles also has implemented some open street concepts, notably with the CicLaVia events that shut down main thoroughfares in different parts of the city.

The idea has resurged in 2020 as a complement to physical distancing. From New York and San Francisco to Winston-Salem, Cincinnati and Seattle, cities across the country are experimenting with closing streets to allow more outdoor dining.

“The street is wide enough, so people would walk safely,” she said.

She said she’s tired of seeing Palm Springs look like “a ghost town,” and misses seeing the crowds that usually fill the streets.

“People are getting depressed, they need each other,” she said.

Melissa Daniels covers business, hospitality, and economic development in the Coachella Valley. Reach out at (760)-567-8458, [email protected], or on Twitter @melissamdaniels.