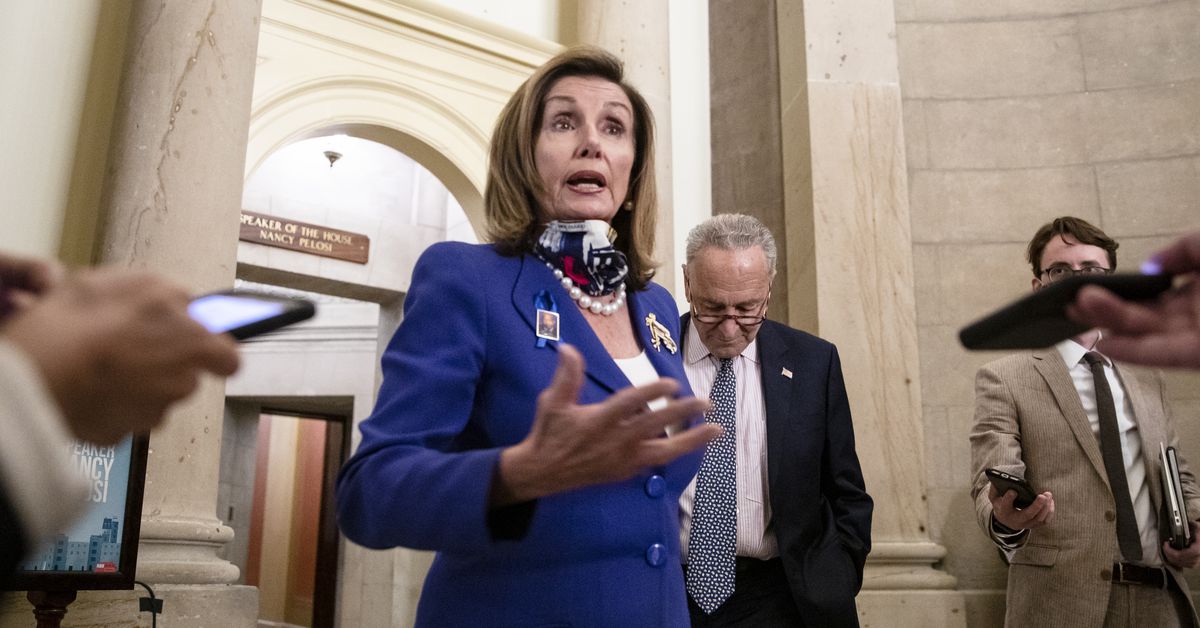 Congress adjourned for the week on Friday having failed to pass a new coronavirus stimulus bill, as the weekly $600 coronavirus unemployment payments 32 million people have come to rely on expired. With Democrats and Republicans still far apart on stimulus priorities, party leaders returned for talks on Saturday, in which they reportedly made “progress” — but are still far from passing ongoing relief.

Treasury Secretary Steven Mnuchin and White House Chief of Staff Mark Meadows met with Senate Minority Leader Chuck Schumer and House Speaker Nancy Pelosi at the Capitol for about three hours on Saturday, with Schumer telling reporters after that meeting, “We’re not close yet. But it was a productive discussion. Now each side knows where, where they’re at. And we are going to work very hard to come to an agreement.”

The comments suggest an improvement from earlier in the week; on Wednesday, Schumer lamented Republicans weren’t sure what they wanted: “We don’t even know what their position is. One senator says one thing. One senator says another. The president says, ‘This’ one day. [Then] the president says, ‘That’.” The Hill similarly reports confusion between the White House and Senate Republicans about who was taking the lead in negotiations with Democrats.

Those issues have been resolved, Meadows suggested, saying, “There are still substantial differences, but we did make good progress.”

Chief among those differences is the amount unemployed Americans will receive in federal unemployment insurance (UI) benefits: An earlier stimulus bill signed into law, the CARES Act, gave unemployed people $600 each week in addition to whatever unemployment funds they received from their states.

Republicans have proposed reconfiguring that benefit to be 70 percent of an unemployed person’s previous wages; Democrats want to continue providing the same $600 in weekly support. And as Vox’s Li Zhou and Ella Nilsen have reported, “late Thursday, the White House made a last-ditch attempt at approving a short-term extension of the UI program.”

As the two sides debated, the benefit ran out; the program expired Friday. A week before, a federal moratorium on evictions of people who receive federal housing assistance expired.

“We’re still a long ways apart and I don’t want to suggest that a deal is imminent because it is not,” Meadows said Saturday.

While jobless benefits have received the most attention, negotiators are also working out what level of aid schools will need in order to reopen this fall, food and rent assistance initiatives, aid for small banks, local government funding, and elections funding.

Lawmakers may be closer to an accord in some of those areas, particularly education, Mnuchin said Saturday.

“I would just say that the four of us also agree the education issue is something that’s very timely. Schools are opening and there are schools that want to open that will need more money for social distancing,” Mnuchin said.

Despite Saturday’s progress, the reality is that there is still a vast distance between Democrats’ proposal for the next stimulus bill (which was outlined in May’s $3 trillion HEROES Act) and the $1 trillion bill proposed by Senate Republicans last week. For instance, $1 trillion is the amount Democrats would like to see allocated for cash-strapped state and local governments, while Republicans have proposed no new funding for that purpose.

Over the last several weeks, talks have gotten hung up along political lines, although the divide in opinion as to what more stimulus should look like has not been explicitly partisan: Republicans — including President Donald Trump and a number of his key allies, like Senate Majority Leader Mitch McConnell — have disagreed about what should be in the bill, with some also citing concerns over its cost.

This disorganization — and that even a united Republican Party would need some Democratic votes to pass a stimulus bill in the Senate — has given Democrats more leverage in their negotiations than they may have otherwise had. Trump, however, has taken to blaming the delay in passing the package on Pelosi and Schumer, accusing them of holding up the bill’s replacement, and using the negotiation period to call for his own reelection this fall.

“The Do Nothing Democrats are more interested in playing politics than in helping our deserving people. DRAIN THE SWAMP ON NOVEMBER 3RD!” Trump wrote on Twitter Friday.

As Zhou and Nilsen have written, at the heart of Republicans and Democrats’ dispute is a fundamental disagreement about how resilient the economy is. Republicans were slow to answer Democrats’ HEROES Act in May because many believed the economy would be better by now, and that the Covid-19 pandemic would be largely under control. Neither of these things has happened, and now the two parties are struggling to agree on what that means for Americans’ needs in the immediate future.

The stakes as lawmakers work to find common ground are high. According to Zhou and Nilsen, federal unemployment assistance during an unprecedented period of job loss may have staunched what would have otherwise been a major increase in poverty levels. The cash payments have also likely bolstered the economy and staved off additional job losses by maintaining consumer spending, according to independent studies by researchers at the University of Chicago, the Committee for a Responsible Federal Budget, and the Economic Policy Institute.

For now, however, the negotiators plan to adjourn. According to CNN’s Manu Raju, aides will continue working toward a deal on Sunday, with Mnuchin, Meadows, Schumer, and Pelosi trying again for an agreement on Monday.